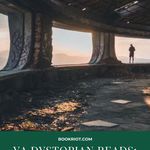 Murder hornets. Pandemics. Riots. Is this The Hunger Games or is this just one really intense year? While we wait for 2020 to become the stuff of YA dystopian fiction rather than our reality, there are so many great dystopian novels out this year to distract/entertain us.

Just a year ago, Book Riot’s Nadia Ali talked about why YA dystopian fiction has continued to thrive. And that continues to be the case in 2020. As we become more aware of how dystopian fiction reflects the realities of our own world, dystopian fiction seems all the more relevant. But what books should you be reading now or on the lookout for in 2020? Check out these fifteen novels.

YA Dystopian Sequels in 2020

We Unleash the Merciless Storm by Tehlor Kay Mejia

The second half of the duology that started with We Set the Dark on Fire is out now! Tehlor Kay Mejia’s novels imagine a world in which choices are very limited for women and for the poor. In the first novel, protagonist Daniela Vargas joins a resistance group called La Voz. In this second novel, La Voz’s fight for freedom and justice for the oppressed class continues. This duology is great for fans of The Handmaid’s Tale and Anna-Marie McLemore.

Imagine Me by Tahereh Mafi

This is the finale to the six-part Shatter Me series, set in a world that’s seemingly falling apart. The population has been ravished by disease, there’s a severe lack of food, and everything seems off. Meanwhile, Juliette is imprisoned for murder. Her touch is deadly, but she’s not sure why. This series follows Juliette’s journey to discover who she is, what she’s meant to do, and how she can make things right in a place that seems so far gone.

Extant: Beyond the Thaw by Tamar Sloan and Heidi Catherine

Authors Tamar Sloan and Heidi Catherine are treating readers to two new Thaw Chronicles novels in 2020. Extant: Beyond the Thaw was released in July, and later this year we’ll get Exist: Beyond the Thaw. These two books are a follow up to the After the Thaw portion of the Thaw Chronicles. So if you haven’t read any of these, start with Rising: After the Thaw. This first book in the series introduces readers to the world after humankind has destroyed it. Humans are now surviving by living in a super greenhouse. Those who have survived are eager to make the world livable again, and of course they turn to the youth for the key to their survival.

This is the follow up to Suzanne Young’s Girls with Sharp Sticks. This feminist dystopian series tells the story of an academy where girls learn to be obedient young ladies. And since I said this is a feminist series, I’m sure you can guess how well that works out. The first novel explores a group of students at the academy fighting against the school. In this second novel, these same students see just how cruel the world outside of their academy truly is.

The Ballad of Songbirds and Snakes by Suzanne Collins

Of course, we can’t leave off the dystopian prequel everyone’s been talking about this year. In Suzanne Collins’s prequel to her beloved Hunger Games series, Collins explores the story of President Snow—yes, the bad guy in the original Hunger Games novel. But this Coriolanus Snow is only 18 years old and the 10th annual Hunger Games are about to commence. Coriolanus has been given the task of becoming a mentor in the games in an attempt to restore the Snow family’s honor. So wait…Collins wants us to root for Snow now? If you’re a fan of The Hunger Games, you know you gotta read this one.

Brand New YA Dystopian Novels and Series in 2020

Goddess in the Machine by Lora Beth Johnson

This book is the start of a brand new sci-fi dystopian series that takes us waaay into the future, as in the year 3102. Yeah, it’s really far into the future, much further than Andra wanted go when she first went into a cryonic sleep for a trip across the galaxy. But now that she’s finally awake about 900 years past what she originally planned, everyone calls her Goddess, and she can’t quite figure out why. But if playing the part of a literal deity will help Andra figure out how to get back to Earth and why she was left sleeping for so long, she’s willing to play the part.

Cinderella is Dead by Kalynn Baron

Love dystopian stories and fairytale retellings? I’ve got the perfect new novel for you. Author Kalynn Bayron sets her dystopian story 200 years after the original Cinderella found her prince. Teen girls must attend a ball in order to find a husband, and if none of the eligible bachelors choose them, the girls are never heard from again. For 16-year-old Sophia, the ball seems like a raw deal. She’s much more interested in being with her best friend Erin. But since same-sex relationships are not allowed in this world, she makes a desperate decision to run away before her fate can be decided for her.

If you’ve ever read a dystopian novel and thought to yourself, “I wish this had more dragons in it,” Andrea Tang’s Rebelwing is going to be your new favorite. This is the story of Prudence Wu, a high school student who smuggles banned media into the United Continental Confederacy, Inc. If you’re wondering, yes, the UCC, Inc. is a future version of the United States that’s been taken over by big corporations. Smuggling is extremely dangerous though, and when one particular drop-off goes awry, Pru only narrowly escapes capture. Who comes to her rescue? A sentient cybernetic dragon.

Some people might argue that post-apocalyptic fiction doesn’t count as dystopian fiction, but I am not one of those people. I see post-apocalyptic fiction as a sub-genre of dystopian fiction. Why? Because apocalypses are often followed by dystopian societies and vice versa: they’re two sides of the same coin. All of that is to say that’s why books like The End of the World is Bigger than Love belong on this list. This is the story of twin sisters Summer and Winter who live on an island separate from the rest of the decimated world. But then a stranger comes to their island, and everything changes.

This one might not be dystopian fiction in the strictest sense, but it is about a strange community of people and preparing for the end of the world. So will it appeal to fans of Dystopian YA novels? I absolutely think so. Honey Juniper and her sisters live in a secret doomsday compound in the Washington wilderness. They’ve spent their entire lives preparing for the end of the world. So when real danger comes for them, they are more than prepared to fight for survival.

YA Dystopian Novels Still to Come in 2020

Get your preordering fingers ready, because the next few books on this list are coming out in the tail end of 2020. This first book is from New York Times bestselling author Marie Lu. The Karensa Federation has taken over the world, leaving Mara as one of the only remaining free nations. The Federation transforms people into mutant war beasts called Ghosts, and they send these Ghosts out to fight against the people of Mara. Talin Kanami is a Striker who is trained to fight these Ghosts. And although the numbers of Ghosts is rising and defeat seems inevitable, Talin refuses to give up hope.

Dystopian books set in a very near future are often the most frightening because they often seem so close to current reality. That’s the case in this novel from Paola Mendoza and Abby Sher. The year is 2032, and American citizens are now chipped and tracked. For undocumented immigrants like Vali, survival within the United States is growing increasingly difficult. She and her family wear counterfeit chips to try to evade detection. When her mother’s chip malfunctions, Vali and her family must flee to the sanctuary state of California. But since California’s borders are currently being walled off from the rest of the country, it is truly a race against time.

This book is the epic sequel to Tochi Onyebuchi’s War Girls. Climate change and nuclear war has destroyed much of the Earth, making it unsuitable for human inhabitance. Many people have left Earth to live in space colonies. This sequel takes place in 2177, five years after the events of War Girls. A mysterious virus has broken out amongst the children of the space colonies. Ify is living in the space colonies and Uzo is providing aid on Earth; the two must work together to find out what is causing this deadly disease.

A fantasy retelling of The Phantom of the Opera featuring queer characters and dystopian themes of fighting an oppressive system? Sign me up. In a lot of dystopian worlds, the rich reign supreme, but not in Ruinsong. Here, a ruthless queen punishes the rich with magic. Cadence is a powerful mage who sings magic to torture the country’s disgraced nobility. But then Cadence reunites with her childhood friend who is now leading a rebellion against the queen and her oppressive government. Will Cadence take a stand? Or will she allow the queen to turn her into a monster?

Day One by Kelly deVos

This final soon-to-be-released novel is another one that falls into the post-apocalyptic genre, and it’s the second part of the duology that started with the novel Day Zero. Jinx Marshall was raised preparing for the end of the world. Her dad taught her Krav Maga, how to extract water from a cactus, and tons of other survival skills. So when violence erupts all over the country, Jinx is prepared. She takes her siblings and attempts to flee to Mexico. Without spoiling anything, all I can really say is that the story of survival in a war-torn country continues in this second novel. Day One comes out in December of this year, so you’ll get to see how it all shakes out soon.

Need even more book recommendations? Check out the 5 Best YA Climate Fiction Books, or try these suggestions for 15 of the Best YA Book Club Recommendations.

Looking for book recommendations catered specifically to your interests and reading preferences? Book Riot’s TBR: Tailored Book Recommendations program is a great way to find your next great read with books picked out specifically for you. You can sign up here!