Mere months ago I hadn’t had the pleasure of encountering Nina Allan’s mind-bending, glittering novels, and now I can’t stop encouraging people to read her books. Those who’ve receive my passed-on copies of her speculative and lovely titles report the same results I experienced upon completion: a kind of shaking awe, a trembling wonder over what we just read. That sensation led me to marathon her catalog within the span of weeks, which may sound fast, but let me also offer this: I savored each chapter. Give yourself more than a day per title—give yourself a day per notion, and enjoy each dive in.

To their credit: these are novels that leave different readers with different impressions about what just happened; one of the Grand Prix de l’Imaginaire winner’s signatures is that her books refuse to direct you when it comes to “correct” readings. A novel that one person will read as about travels to other worlds could as easily be read as a commentary on trauma; a novel that one person might read as a multiverse tale might also be a story about processing rape. Both might also be both. It’s really up to you.

Reading Nina Allan is the literary equivalent of getting lost in a steampunk-inspired, cutting edge fashion show, letting antique-looking fabrics run through your fingers while you dream of places you’ve never seen. Her books are cabinets of curiosities, are ye olde shoppes brought to life, are archaeological excavations of the questions that press upon us most urgently. 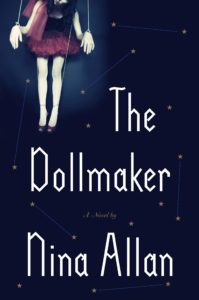 Truly. Don’t miss these titles. And please begin here: with  The Dollmaker.

Collectors of fascinating, intricate, and/or lost and repurposed objects recur in Allan’s fiction, but nowhere as centrally (and non-threateningly) as in this novel. It’s set in the now, but it has a Victorian edge; its out-of-timeness is one of its most engrossing early features.

The story centers on Andrew Garvie, who transferred his lifelong loneliness into collecting and dollmaking. Andrew’s dolls aren’t like other dolls: they begin with damaged antique forms and are reformed into something new, eerie, and unmissable. In their blunt otherness, these prized collectibles mimic aspects of Andrew’s self; because of his height, few people initially treat him as other than a curiosity.

Perhaps that’s why Andrew strikes up a correspondence with Bramber, who lives hidden in a group home to his north and who treats secret pains of her own. Bramber introduces Andrew to the short stories of Ewa Chaplin, a Holocaust survivor and fellow collector; in reading them, and in learning about Bramber bit by bit, Andrew falls in love. He decides to rescue Bramber, and sets out on a journey in her direction.

As you read, you’ll note complementary qualities between Ewa Chaplin’s stories (included in full) and Andrew and Bramber’s lives; this is quintessential Allan. Lean into it. It’ll do you favors for your next Allan read: 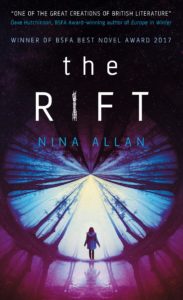 Selena and Julie’s childhood looked normal enough from the outside: theirs was a middle class family, with two parents and two children. But their mother was unhappy, and Julie and Selena’s bond began to break apart as they moved toward adulthood. And then Julie disappeared, and the family that was only barely holding it together to begin with shattered.

As an adult, Selena learned to live life stepping lightly. You don’t take chances when you learned in the worst way possible that anything can happen when you do. Her job in a jewelry shop was not all she could’ve aspired to, but it’s enough for her. Her house has odd angles and quirks, but it’s home. Her recent break-up wasn’t ideal, but alone, she is safe. Her father’s death still weighs heavily on her, and there are things she and her mother just don’t say.

And then Julie reappears.

At least, the girl who shows up says she’s Julie. But she’s been missing for years, and she returns with an incredible story of having been on another planet, made more credible by the mysterious artifact that she wears around her neck.

There are are elements here that recur across Allan’s books: the alien artifact, as it functions, has things in common with both antique dolls and time-bending tourbillions; the dissatisfied mother whose unhappiness is mimicked in her family members’ lives runs throughout Allan’s works. The sense that the otherworld elements can other be accepted or not shrugs an invitation to readers of all levels of credulity throughout all of Allan’s books, though accepting odd turns is a more overt necessity in the book you should read third: 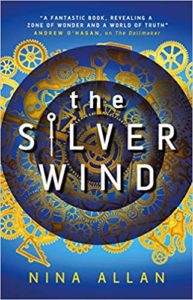 I love that Allan’s own descriptions of The Silver Wind begin with Martin Newland, the recurring character who first inspired its movements. I don’t know how to begin descriptions of the book that way; I always start with Owen, whose tourbillion design binds all of the movements together. That’s because the precision of of his timepiece’s construction has an unexpected effect: it enables the bending of time, and has implications across the multiverse.

The immediate implications of Owen’s watch are apparent as the world changes around him when he decides to complete it, as historical certainties start to bleed into the realm of rumors and could-have-beens while he walks through London’s darkening streets. Those implications become more apparent in the stories that follow, which are a cautionary, perhaps, against trying to jump between realities: England is plagued by xenophobia and restrictions, and then is not; people are captured in the woods and forced into time-hopping service, or in other iterations of reality are not. Martin Newland loves his sister, Martin’s sister dies, Martin sees a mysterious figure on the beach who seems familiar; a watch heals itself, a heart is unbroken.

These movements are uncanny, strange, gripping, and demanding. More than any of Allan’s other books, you should read them in close proximity to keep track of connections and deviations. Lingering questions about the ethics and implications of multiverse travel are a fascinating bonus. And once you’ve gotten used to the many “what’s real?” moments in The Silver Wind, you’ll perhaps be ready for The Race. 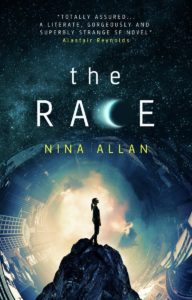 This one fucked me up. Let me emphasize that this is a compliment, but also why I’m recommending that you read it last, and also that you be aware that there are triggering things within it for assault survivors. DO NOT read the Amazon description or the back cover blurb: their summaries cover parts of the stories accurately, but confuse what’s actually happening in the book as a whole.

Yes, the book begins and ends with an alternate, post-some-war England in which smart technology allows people to bond with genetically modified animals. But if you let yourself believe that the whole novel will follow the gripping track of its first movement, in which gambling with smart tech goes awry, you will end up fucked up. That is possibly fine, just: be warned.

Know that the book will move from smart tech into very real, very now stories centered in a struggling family whose eldest son is a genius when it comes to antiques and a monster when it comes to vulnerable people. Also know that all four movements do tie together: as variations on each other’s worlds; as alternate versions on each other’s worlds; as compartmentalizations of injuries inflicted in each other’s worlds. You can let it be writer-rewrites-her-pains, you can let it be alternates-speak-across-timelines. Let it be what it is to you. There’s a reason that this one earned so many accolades; it is a daring first novel.

I hate to sound like a carnival barker (though carnival barkers would find homes in various movements of these various novels), but this is true: you’ve never read anything like these novels. At the same time—and this is part of their particular magic—elements of all of them will be tantalizingly familiar, both comforting and off-putting. All of the adjective combinations you’ll use to describe them will seem odd fits: they are enthralling and disturbing. They are magical and all too real. They are old-fashioned and futuristic, curious and dazzling.

You will love them. They will make you.

You should begin now.