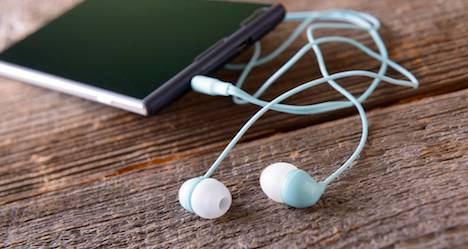 This post is sponsored by Toward a Secret Sky by Heather Maclean.

Audiobook listening is growing rapidly specifically with 25- to 34-year-olds, thanks to a pernicious “sleep when you’re dead” mindset reflective of the young, aspirational, educated American: We are fearful of mono-tasking, find downtime distasteful, and feel anxious around idleness. Even when picking socks from a drawer, young workers feel better if information’s somehow flowing into their brains. And this is exactly the restless market that book publishers need.

Click the numbers on the map to take an audio listening tour of New York City, where talented HarperCollins authors lived and wrote, including Mark Twain, who described the city this way: “I have at last, after several months’ experience, made up my mind that it is a splendid desert—a domed and steeped solitude, where the stranger is lonely in the midst of a million of his race.”

HarperCollins made a literary audio tour of NYC!

With 108 finalists, this is the most extensive Hugo ballot on record. 2464 valid nominating ballots (2458 electronic and 6 paper) were received and counted from the members of the 2016, 2017, and 2018 World Science Fiction Conventions.