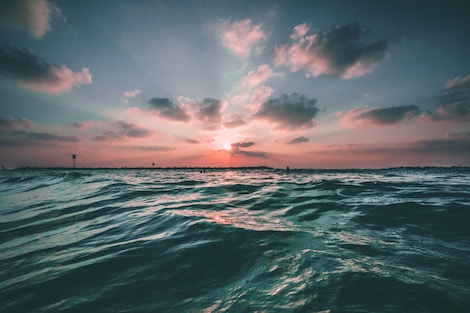 The ocean has had a very significant role in poetry since the dawn of poetry itself. It’s easy to see why. The ocean — both wild and calm, dangerous and beautiful — is a made up of contradictions and mystery. Ocean poems can not only be dedicated to capturing the heart of sea, but to metaphors for love and trauma, among many other things. More than that, the ocean has played a role in the history of many cultures, making it a setting that is both intimately personal, and vastly universal.

Unsurprisingly then, poetry about the ocean takes many shapes. From a simple contemplation of the sea to a reflection of our own lives. Here’s a list of some of these brilliant ocean poems starring the sea. 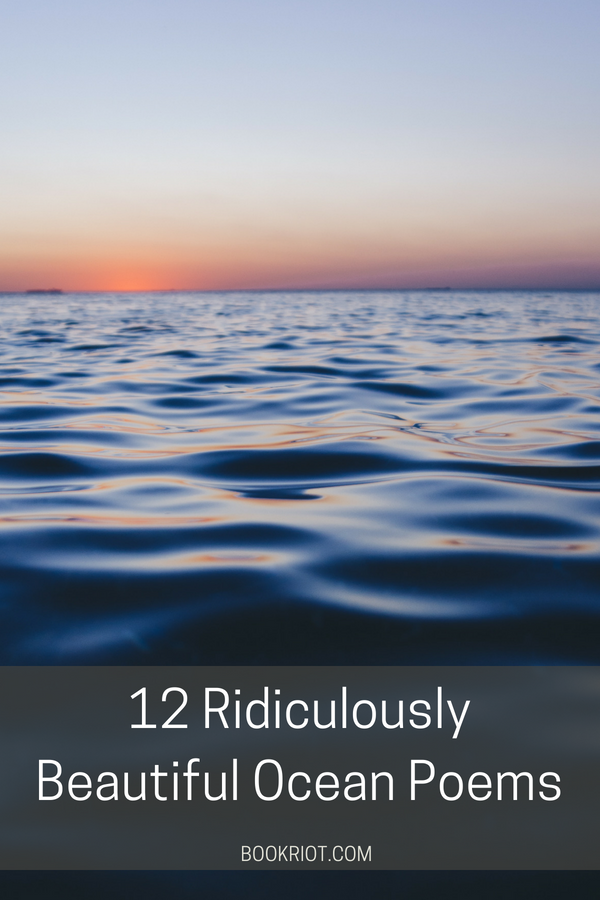 1. The Rime of the Ancient Mariner by Samuel Taylor Coleridge

The sea is calm tonight.


Category ID: 4284
Category ID: 1375
Check Your Shelf Newsletter
Sign up to receive Check Your Shelf, the Librarian's One-Stop Shop For News, Book Lists, And More.
Thank you for signing up! Keep an eye on your inbox.
By signing up you agree to our terms of use
The tide is full, the moon lies fair
Upon the straits; on the French coast the light
Gleams and is gone; the cliffs of England stand,
Glimmering and vast, out in the tranquil bay.
Come to the window, sweet is the night-air!
Only, from the long line of spray
Where the sea meets the moon-blanched land,
Listen! you hear the grating roar
Of pebbles which the waves draw back, and fling,
At their return, up the high strand,
Begin, and cease, and then again begin,
With tremulous cadence slow, and bring
The eternal note of sadness in.

Sophocles long ago
Heard it on the Ægean, and it brought
Into his mind the turbid ebb and flow
Of human misery; we
Find also in the sound a thought,
Hearing it by this distant northern sea.

The Sea of Faith


Was once, too, at the full, and round earth’s shore
Lay like the folds of a bright girdle furled.
But now I only hear
Its melancholy, long, withdrawing roar,
Retreating, to the breath
Of the night-wind, down the vast edges drear
And naked shingles of the world.

Ah, love, let us be true
To one another! for the world, which seems
To lie before us like a land of dreams,
So various, so beautiful, so new,
Hath really neither joy, nor love, nor light,
Nor certitude, nor peace, nor help for pain;
And we are here as on a darkling plain
Swept with confused alarms of struggle and flight,
Where ignorant armies clash by night.

3. Secrets of the Sea by Mohamed Hassan

4. Sail Away by Rabindranath Tagore

Early in the day it was whispered that we should sail in a boat,
only thou and I, and never a soul in the world would know of this our
pilgrimage to no country and to no end.

In that shoreless ocean,
at thy silently listening smile my songs would swell in melodies,
free as waves, free from all bondage of words.

Is the time not come yet?
Are there works still to do?
Lo, the evening has come down upon the shore
and in the fading light the seabirds come flying to their nests.

Who knows when the chains will be off,
and the boat, like the last glimmer of sunset,
vanish into the night?

6. By the Sea by Emily Dickinson

I started early, took my dog,
And visited the sea;
The mermaids in the basement
Came out to look at me.

And frigates in the upper floor
Extended hempen hands,
Presuming me to be a mouse
Aground, upon the sands.

But no man moved me till the tide
Went past my simple shoe,
And past my apron and my belt,
And past my bodice too,

And made as he would eat me up
As wholly as a dew
Upon a dandelion’s sleeve –
And then I started too.

And he – he followed close behind;
I felt his silver heel
Upon my ankle, – then my shoes
Would overflow with pearl.

Until we met the solid town,
No man he seemed to know;
And bowing with a mighty look
At me, the sea withdrew.

7. Sea of Strangers by Lang Leav

8. Song of the Sea by Rainer Maria Rilke

Timeless sea breezes,
sea-wind of the night:
you come for no one;
if someone should wake,
he must be prepared
how to survive you.

Timeless sea breezes,
that for aeons have
blown ancient rocks,
you are purest space
coming from afar…

Oh, how a fruit-bearing
fig tree feels your coming
high up in the moonlight.

9. We Face This Land by Sarah Maria Griffin

10. The Sea is History by Derek Walcott

Where are your monuments, your battles, martyrs?
Where is your tribal memory? Sirs,
in that gray vault. The sea. The sea
has locked them up. The sea is History.

First, there was the heaving oil,
heavy as chaos;
then, like a light at the end of a tunnel,

the lantern of a caravel,
and that was Genesis.
Then there were the packed cries,
the shit, the moaning:

Exodus.
Bone soldered by coral to bone,
mosaics
mantled by the benediction of the shark’s shadow,

that was the Ark of the Covenant.
Then came from the plucked wires
of sunlight on the sea floor

the plangent harp of the Babylonian bondage,
as the white cowries clustered like manacles
on the drowned women,

and those were the ivory bracelets
of the Song of Solomon,
but the ocean kept turning blank pages

looking for History.
Then came the men with eyes heavy as anchors
who sank without tombs,

brigands who barbecued cattle,
leaving their charred ribs like palm leaves on the shore,
then the foaming, rabid maw

of the tidal wave swallowing Port Royal,
and that was Jonah,
but where is your Renaissance?

Sir, it is locked in them sea sands
out there past the reef’s moiling shelf,
where the men-o’-war floated down;

strop on these goggles, I’ll guide you there myself.
It’s all subtle and submarine,
through colonnades of coral,

past the gothic windows of sea fans
to where the crusty grouper, onyx-eyed,
blinks, weighted by its jewels, like a bald queen;

and these groined caves with barnacles
pitted like stone
are our cathedrals,

and the furnace before the hurricanes:
Gomorrah. Bones ground by windmills
into marl and cornmeal,

then came, like scum on the river’s drying lip,
the brown reeds of villages
mantling and congealing into towns,

and at evening, the midges’ choirs,
and above them, the spires
lancing the side of God

as His son set, and that was the New Testament.

Then came the white sisters clapping
to the waves’ progress,
and that was Emancipation –

jubilation, O jubilation –
vanishing swiftly
as the sea’s lace dries in the sun,

but that was not History,
that was only faith,
and then each rock broke into its own nation;

and the furred caterpillars of judges
examining each case closely,
and then in the dark ears of ferns

and in the salt chuckle of rocks
with their sea pools, there was the sound
like a rumour without any echo

11. The Ocean by Nathaniel Hawthorne

The Ocean has its silent caves,
Deep, quiet, and alone;
Though there be fury on the waves,
Beneath them there is none.

The awful spirits of the deep
Hold their communion there;
And there are those for whom we weep,
The young, the bright, the fair.

Calmly the wearied seamen rest
Beneath their own blue sea.
The ocean solitudes are blest,
For there is purity.

The earth has guilt, the earth has care,
Unquiet are its graves;
But peaceful sleep is ever there,
Beneath the dark blue waves.

What are your favorite ocean poems? Leave the best ones in the comments! Want even more poetry? We got you.