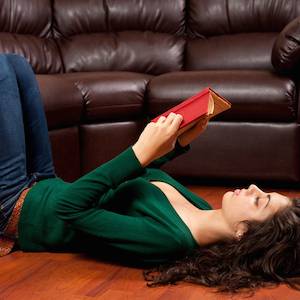 I’ve been guilty of faking so many things in my life as a reader- even at one point only pretending I liked to read at all.

Let me give you some examples.

I Actually Disliked Reading For a Long Time

I went from a kid who would tuck a book in the waistband of cutoff jean shorts and climb to the highest branch I could brave so everyone would leave me alone, to a teenager who would check out classics at the library so I could pretend to be reading/have read them.

As a kid, reading got me away from the world, where I was discovering just how different I was from my more athletic, less awkward friends and the cousins I played with all through the summer. I got to imagine myself as whatever character I pleased, a long-lost Wakefield triplet or even my own, much cooler twin who had come to town to take my place. Seriously, I tried that in second grade, with costume jewelry and black clothes. No one bought it–hard to believe, I know. Maybe I should’ve called myself something more creative than Janelle. It was my first failure at a bookish performance.

In my teens, it was music, not books, that got me through my tough times; my favorite singers wrote lyrics that did what I wanted my poetry to do, and they performed in the raw, honest ways I desperately hoped would define my obviously destined writing career, which I convinced myself would be wildly successful by the time I was 30. Like, going on late-night TV successful. Cover of Rolling Stone successful.

I Tried To Be Athletic For Awhile

Which is not to say that bookishness and athleticism are mutually exclusive by any means, but I only have brain space for one thing at a time. My tiny school had one sport, and everyone else in my family was amazing at it. Alas, basketball and I were just never meant to be. I was small and quick, but I’m also uncoordinated as fuck and really, really hate practicing stuff. If I’m not naturally good at it, or if I can’t master it with minimal effort, good luck keeping me interested. (This is why I enjoy the idea of video games much more than actually playing them.) I quit the team in junior high because I realized I’d rather be in the bleachers during practice, faking both reading and cramps or an ankle injury.

That’s when I started to understand that a small part of me was creating one identity to avoid another: if I quit basketball and had nothing to replace it, I was just a loser; if I quit basketball and proved I was as intense about books as others were about free throws, then at least I had a thing. Right? Sure. That. It was better than broadcasting the fact that I wanted to be a writer; if I did that, I might have to let people read my poems, which I was just too painfully shy and thin-skinned to do. Reading was easier; pretending to read, and to have read, was the easiest thing ever. While not-reading, I wrote literally hundreds of angst-tastic poems that wanted to be Tori Amos or PJ Harvey songs in private and shared them with no one (yet); I checked out book after book from the library and talked about them with anyone who would listen (teachers).

One year (eleventh grade?), I was the only student in a study hall with my English teacher (tiny, tiny school with very few elective class offerings and nowhere else to put me), and I decided it was time to start sharing my poems with him. He never rolled his eyes at me, and his criticism was pretty gentle (don’t use the f-word so much, mostly). That made me even more sure my very specific idea for a writing career- spoken-word poet who released a CD every year under a really cool pseudonym (I KNOW, OKAY, I KNOW)- would one day be a reality. (Spoiler alert: It isn’t, and I’m in my 30s.)

I read Alice Walker because Tori Amos told me to: Possessing the Secret of Joy and The Color Purple. I read Maya Angelou. I felt my first real empathy pains, and I needed that switch flipped to get me out of my own little bubble of personal rage.

I memorized Sylvia Plath poems, “Mad Girl’s Love Song” and “Lady Lazarus.” Edna St. Vincent Millay spoke to me, and I can still recite “Well, I have lost you…” flawlessly. I kept printouts of all of these and more in my Bible and studied them during Sunday school. I built sermons around them in my head and tried to deliver them to my friends at the lunch table on Monday. Sometimes they listened. Usually one of them kicked me under the table to shut me up.

I read The Bell Jar and felt uncomfortable, too raw and too seen by it. I read it while listening to Up Up Up Up Up Up by Ani DiFranco, sprawled on my bed in the same position for the few hours it took me to eat it up, emerging sore and tear-stained and broken-but-fixed.

I Was Convinced That Books Were the Ticket to a Cool, Long-Distance Boyfriend

When my parents took me school shopping, I had a bookstore meet-cute fantasy straight out of a ‘90s teen movie. I trolled the classics section for pretty copies of books I was supposed to like. Anyway, I would reach for something just as a cute boy from another school reached for the same thing, and our hands would brush. I would, of course, bare just the right amount of midriff and he would appreciate my shit-kicker boots and DGAF-itude. We would date, long distance, and I wouldn’t have to worry about the rejection of my peers because I could tell them I had met my boyfriend when we both reached for the same copy of Catcher in the Rye or whatever, and mold him into the male version of myself if I wanted to. It never happened, but it was a nice recurring summer fantasy.

Books Finally Made Me Get Real with My Actual Life

Senior year, I met my bookish match. I have to talk about him very carefully. He was someone I’d know a while, but I finally reached a point where he found me interesting (probably my eighteenth birthday). He gave me Wuthering Heights because of the taste I pretended to have. I shared all of my writing with him, and told him all the ghost-and-monster stories behind it. I shared more than just my words with him. I read, for real, to impress him. I read everything he told me to read unless it was written by a man because did I mention I was also learning feminism and going through my man-hater phase? Every man but him. Him and no one else.

I realized life was not a romance novel where unlikely couples overcame taboos and lived happily ever after. I should’ve paid more attention to what he was telling me to read, because I think that’s what he was trying to tell me, now that I’ve had more than a decade to mull it over.

Harry Potter Made Me a Real Reader. Yes, as an Adult.

I loved it more than I’d ever loved anything, including The Boxcar Children. I read all of the HP books that were out the summer before my sophomore year of college, and I borrowed new ones from my niece, who got them for birthdays and holidays the years they came out, and read them before she did because I was the faster reader (I mean, I had ten years on her). Reading Harry Potter killed my snobbery about fantasy, which I love now. It brought me around to YA, which is obviously for everybody.

I Don’t Care a Whole Bunch About Books-as-Objects

As an adult with her own living space, my worst tendency to perform has been owning lots of books because Real Readers Should. In the last year, though, I’ve come to know that Real Readers aren’t a thing. You’re a real reader if you read. Books can be a great comfort and they are nice to have around. I know almost exactly how many I own. (About five hundred print books and a hundred-or-so ebooks.)

If books are supposed to be comforting objects, though, then they can’t fully live up to that for a person who is constantly pretending to be a certain type of reader. I’ve embraced the kind of reader I am, and why I read: I am comforted to know I’m not alone with whatever experiences I’ve had, good and bad; I am disturbed and saddened by injustices I can’t understand because of my race, my culture, my status, my sexuality–everything that sets me apart from people who have been more marginalized than I; and I’m moved to action and outspokenness by both my comfort and my discomfort because I want the world to be a little more right, as much more as I can make it as one woman with an internet connection and the ability to put some words into sentences. I read because it flips my empathy switch daily, and it encourages me to leave that switch turned on in my actual life, with the actual people I know and who know me.

That’s a thing I’ve learned, and it’s not something I could ever have performed, regardless of how many times I pretend I’ve actually finished Pride and Prejudice or watched the Colin Firth adaptation (also zero), or feigned a remote sexual attraction to him (sorry, he looks like an uncle to me). I’ve learned my real reasons for reading, and I’ve come to terms with aspects of myself I liked and didn’t, discarding some along the way. I’ve realized, too, that purging my shelves every now and then is kind of therapeutic. That’s a post for another day, though.

What about you? What “reader” roles have you performed, if any? What made you a reader for real?