This list of books about future technology is sponsored by The Hive by Barry Lyga and Morgan Baden from KCP Loft. 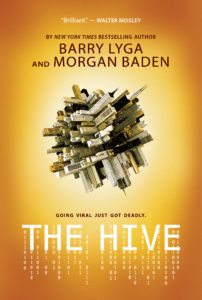 Today’s technology is developing at a mind-blowing rate. It seems like every time I open my browser, something bigger and brighter is now on offer. From biotechnology to domestic service, from transport to telecommunications, many of us now possess items we could never have predicted with our wildest dreams…Or could we?

It won’t surprise you to know much of the technology we use today was first conceptualised in science fiction literature. Each year, someone is publishing a list of the “Top Ten Tech Predictions from Science Fiction Books” or worse, “These Sci-Fi Writers Predicted the Future!!”

It’s funny how many of them are wrong. Not funny “ha-ha” but funny “oh, it’s the same list of contemporary white men, without any acknowledgement of the history of science fiction.”

I’ll be the first to admit, I thought Jules Verne was the first to imagine the submarine. And yes, my early sci-fi days considered H.G. Wells the father of time travel. I wish I could go back to the younger version of me and say, “Sweet Summer Child. You will soon discover even greater libraries.”

Category ID: 47669
Check Your Shelf Newsletter
Sign up to receive Check Your Shelf, the Librarian's One-Stop Shop For News, Book Lists, And More.
Thank you for signing up! Keep an eye on your inbox.
By signing up you agree to our terms of use

The truth is tech predictions in science fiction have suffered the same fate as science fiction over the years: grossly limited to the same white male writers again and again. The greatest predictions tend to be associated with the greatest piques in interest for science fiction. Mary Shelley’s Frankenstein coincided quite nicely with the boom in technological innovation from the Industrial Revolution. The birth of “pulps” in the early 20th Century provided an easy-to-consume medium for sci-fi short stories. And then there is the Golden Age of Science Fiction, during the 1940s and 1950s, fueled by the desire for sensation and the need to escape to the excitement of space travel and fantasy.

Well, it’s time to set the record straight. It’s time to acknowledge the creativity (and the history) of technology in science fiction. Because if you are truly going to respect the technology we have, you need to appreciate who came up with the idea in the first place.

As mentioned before, many lists attribute the creation of the submarine to Jules Verne and his novel 20,000 Leagues Under the Sea (1870). Some will even quantify it by saying Verne created the idea of the first electric submarine. However, submarines had been in practical development for at least 70 years prior to Verne’s idea. The first submarine to successfully dive, cruise underwater, and resurface under the control of the crew was the “Sub Marine Explorer”, designed by Julius H Kröhl in 1866; many of his elements are still incorporated in modern submarines.  And if you really want to be picky about the mechanical power, the French launched the “Plongeur” in 1863 using compressed air, while the Spanish had a combustion-powered submarine in 1864. 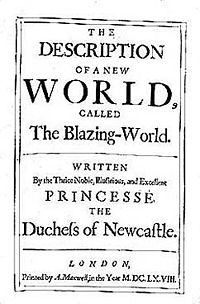 However, the history of the submarine goes even further back than the 1800s. In 1666, Margaret Cavendish, Duchess of Newcastle, wrote about a submarine in her story The Description of a New World, Called the Blazing-World. Sure, her submarine was pulled along by fishmen within the underwater sovereignty, but the concept of a water-tight form of transport is still true. And that’s still not the oldest! In One Thousand and One Nights (circa 800–1000 CE), many stories included science fiction elements: multi-world travel, humanoid robots, flying mechanical horses, and – you guessed it – an underwater submarine society with its own transport.

One Thousand and One Nights also predicted flying vehicles; albeit the story of Aladdin included a flying carpet, not a car per se. The idea of an actual automobile travelling through the air was given more detail in Ralf 124C 41+ by Hugo Gernsback (1911). Now, Gernsback is considered to be one of the most prominent and respected writers in the science fiction genre; the famous Hugo Awards are named after Gernsback. When it comes to Ralf 124C 41+, Gernsback is considered the visionary behind flying cars, solar power, and video-calls.

And that would be wrong.

Seven years earlier, a Muslim feminist and social reformer from Bengal included the same ideas in The Sultana’s Dream (1905). Rokeya Sakhaway Hussain created the world ‘Ladyland’, where men were locked away, thus removing most of the crimes in society and allowing women the opportunity to focus on growth and development without the distractions of war and violence. Again, this utopian world predicts great technological advancement as women have the freedom to invent things like flying cars, solar power, video-calls…AND weather control and laborless farms. With the flying cars currently being tested in cities around the world, I am waiting for the scientists to give thanks to the inspiration of Hussain and her ‘Ladyland’. I seriously can’t wait for that press release.

While ‘necessity is the mother of invention’, food production is quickly becoming a greater priority for scientists and a key feature in tech research. While many people are experiencing culture shock at the thought of lab-grown meat stocked next to their rack of lamb cutlets, scientists have been working on developing the ideal fake-burger for quite a few years. Well, here’s the newsflash: sci-fi writers have been talking about it even longer.

First credit is usually given to The World Set Free (1914) by H.G. Wells; by freeing ‘man’ from the toils of agriculture, he would be free to become a builder, a traveller, and a maker. Instead, the role of food production would lie with the chemists and their ‘triumphs of synthesis’.

Perhaps Wells was inspired by Mizora: A Prophecy by Mary E. Bradley Lane (1881), first serialised in the Cincinnatti Commercial newspaper before published as a book in 1890. Mizora tells of a utopian future with an all-female self-sufficient society. While the racist attitudes of the book are enough to warrant not reading it now, it is still worth noting the futuristic predictions for a diet of chemically prepared artificial meat. While production is gradually entering the market, we aren’t quite at the stage of full substitution as predicted in Mizora.

We’ve been talking about science fiction and are yet to discuss biotechnology, one of the fastest growing areas of technological development in modern society. It has also been one of the more fascinating elements of science fiction, particularly when bringing together the science of cybernetics with the philosophy of human identity. Mainstream science fiction fans often attribute the concept of cybernetic science with Martin Caidin’s Cyborg in 1972. It was soon picked up for television under the title The Six Million Dollar Man, although I’m not sure if six million dollars would buy you the same cybernetic enhancements today. 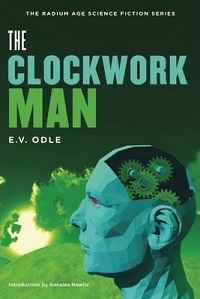 However, before Caidin, we had The Clockwork Man (1923) by E.V. Odle. The ‘Clockwork Man’ is a cyborg from the future, implanted with a clockwork device in his head that allows him to travel through space and time. Unfortunately, his device has glitched, dumping him in the middle of a cricket game in 1923. It was the first book with a cyborg as a major character, giving the visual idea more akin to Doctor Who’s Clockwork Droids than the six-million-dollar Lee Majors. While the focus of the story is less on the technology and more about how to merge the tech with humanity, the concept of cybernetics gave rise to ideas for the future.

Interesting side note: there is a theory that E.V. Odle was a pen name for Virginia Woolf, who liked to write sci-fi on the side. However, no proof has ever been provided beyond the heavy influence of Woolf’s work seen within the writing of The Clockwork Man. Either way, the idea of a ‘clockwork man’ has enhanced future predictions for the world of biotechnology and cybernetics.

If the history of science fiction is anything to go by, we are perfectly primed for a resurgence in tech predictions from our contemporary sci-fi writers. We are more aware than ever of the need for diversity in our writers and our stories. We have the digital means to publish across multiple mediums, casting our ideas far and wide. And in regards to our current social environment, there is plenty of potential for tech advancement to manage the utopian/dystopian futures we fear we are heading for.