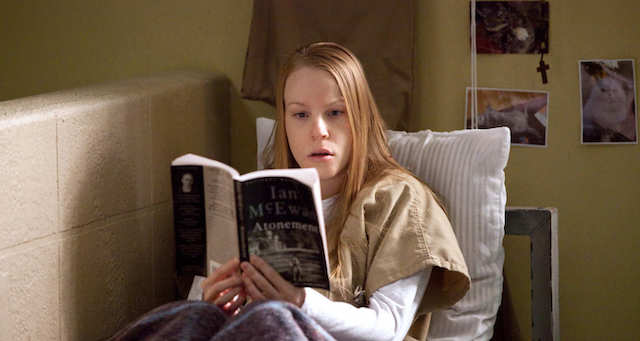 Books are important to the texture of everyday life in Orange Is the New Black, which is based on a memoir and recently concluded after seven seasons. On the show, the Litchfield inmates use books for information, for solace, and for killing of time.

Books are also important in real-life prisons; you can donate books requested by inmates by looking at their wish lists. As an anonymous Book Riot contributor experiencing incarceration has written:

“Books…were the few rays of light I saw when locked down for 22 hours a day in a two-man six-by-eight foot cell. I cannot properly express…the glow of hope that comes from entering a small prison library to scoop up four donated books to fill the hours other spend yelling about sports, crimes (past and planned), and women.”

Yet prison administrators commonly restrict the reading material that can be brought in. This includes banning material that contains sexually explicit passages or descriptions of illegal activity, limiting deliveries to those from authorized vendors, preventing the entry of books that explore civil rights and race relations, and imposing other arbitrary and unexplained limits.

Orange Is the New Black characters spend a good deal of their time reading; Book Riot has rounded up some of their book selections for Season 5 and Season 6. Understandably, however, the writers are reluctant to devote too much time to scenes of women lying on their bunks and reading. It’s hard for much drama (or comedy) to ensue this way.

One workaround is using books and libraries as settings or plot points to precipitate drama or explain motivations. Here’s a list of some of the many bookish things Orange characters do that aren’t exactly reading books. 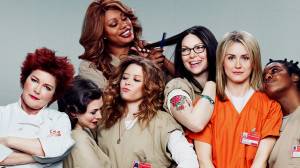 Warning: spoilers abound, although no characters are named.

To read the work of incarcerated writers, there’s no shortage of nonfiction books, poems, and other types of writing.