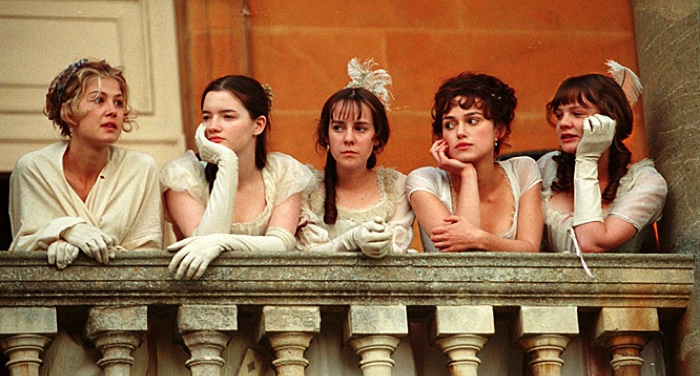 By “all of this” she means, of course, the COVID-19 Pandemic sweeping the country. She went on to tell what the main characters from her best-selling novels The Hate U Give and On the Come Up would be doing during social distancing. Twitter eagerly responded, adding their input and asking Thomas more questions.

Several other authors chimed in as the conversation continued, including LL McKinney, Elizabeth Acevedo, and Ally Carter. While Angie Thomas retweeted and laughed at readers’ ideas of what her character would be doing, I began to think about my other favorite books. 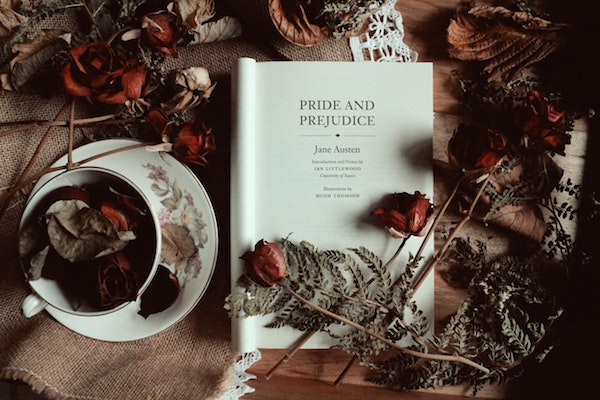 How would the Pride and Prejudice characters react to social distancing? For your consideration: my sleepless 3:00 AM musings. *Imagine a Wayne’s World style dream dissolve here.*

How The Elder Bennets Would Handle Social Distancing

Mr. Bennet would declare that he was not at all worried about the virus and that his wife and daughters were being hysterical. He would, however, use social distancing as an excuse to shut himself up alone in his library. (And he would secretly be monitoring the news and taking good care of himself.)

Mrs. Bennet would alternate between fretting over the interruption to her pursuit of Bingley and fancying herself ill. She would be in bed, complaining of being ill-used. She would also be sending servants with notes to her neighbors, especially those at Netherfield.

Thanks to Mrs. Bennet’s cunning, Jane would be convalescing at Netherfield. She probably just has a cold, but with the slightest appearance of symptoms, her mother sent her to Netherfield on some pretext. There is no way Mrs. Bennet would let her avoid an opportunity to be quarantined with Bingley and thereby secure his heart.

Consequently, Elizabeth would also be at Netherfield. Truly worried about her sister and in need of some fresh air, Lizzie would make the walk to the Bingley home. She would not be worried about social distancing, because she doesn’t like anyone in the household well enough to want to be within six feet anyway. She’ll spend most of her time six feet from her sister’s bedside.

How The Younger Bennets Would Handle Social Distancing

Pride and Prejudice’s most bullheaded characters, Kitty and Lydia, would be completely unmanageable. They would spend so much time arguing and making noise that their parents would allow them to walk to Meryton. Naturally, their parents would make them promise to maintain social distancing. Obviously, they would not comply and would do their best to get close to the officers.

Mary would be studying and practicing the piano. At every opportunity, she would also share her deep thoughts on the situation. Thus, social distancing from Mary would be easy for everyone.

How The Netherfield Party Would Handle Social Distancing

Very few of the characters at Netherfield would be pleased with the situation. Bingley would be delighted to have the eldest Miss Bennets with them, but he would wish to be closer to Jane.

Bingley’s sisters would be even grumpier. They would be tired of one another, but hesitant to stir out of doors. Caroline would be especially disgruntled at having to keep her distance from Darcy. She will have a hard time whispering snide comments about Elizabeth from six feet away.

Darcy would be forced to compare Elizabeth’s adaptability and intellect to Caroline’s irritable boredom. While social distancing isn’t typically difficult for him, he’d soon be wishing he could get closer to Miss Elizabeth Bennet.

How Other Pride and Prejudice Characters Would Handle Social Distancing

Though several characters had yet to be introduced at the point in the story where I imagined this, I couldn’t help thinking about them. Lady Catherine would have advice for everyone. Fortunately, with her age she would be forced to stay inside. Her daughter Anne would be completely quarantined due to her delicate disposition. Thus, Lady Catherine would be dispatching many notes and orders via servants.

Luckily, Mr. Collins would come daily to hear her pronouncements from a respectful distance. He would rapturously carry out her every command. Also, he would grace his parishioners with regular visits, during which he would preach at them from their yards.

Finally, Wickham doesn’t know how to keep his hands to himself or mind his own business so he’d be in a hospital somewhere. It would serve him right.