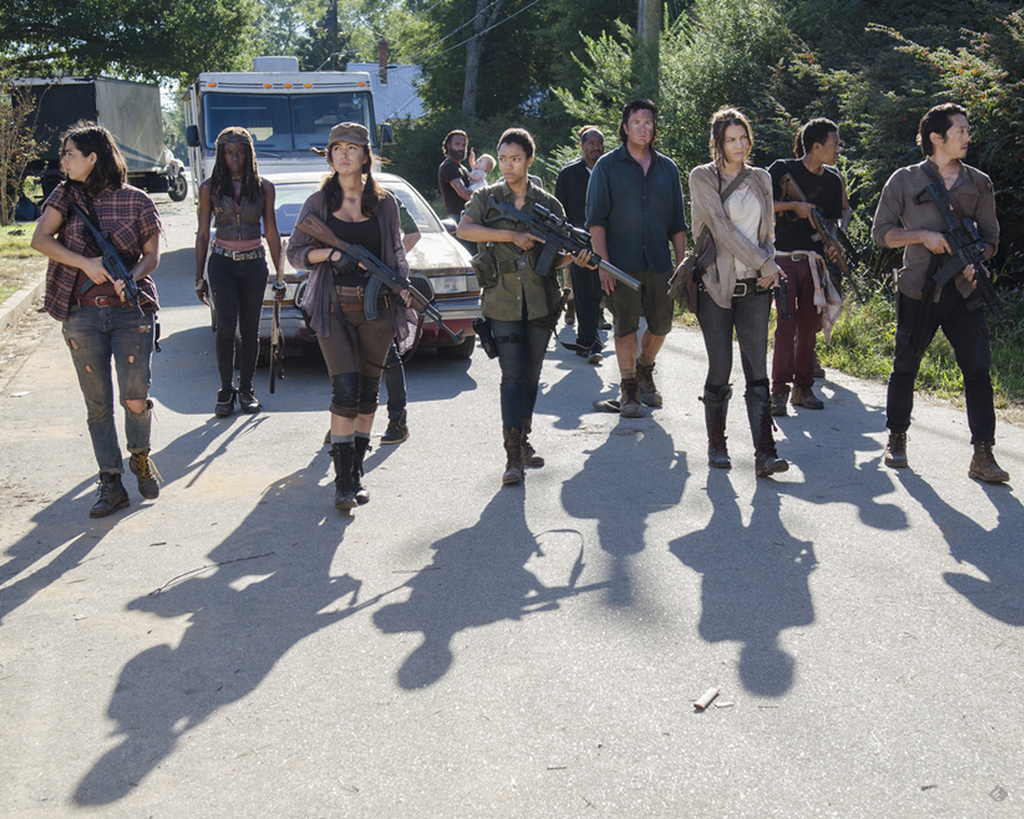 Welcome to the official Panels The Walking Dead weekly recap! I did these recaps occasionally for iFanboy back in the day, and I am thrilled to be bringing them here to Panels. In the discussion, please be mindful of spoilers from the comics, let’s let everyone get their reveals the old-fashioned way.

We’re back to find out what Aaron’s good news is! We start in the barn prior to Aaron being brought in with Maggie and Sasha. Suspicion is obviously and immediately high, but he’s alone and they’ve taken his weapons. Aaron claims to have a community nearby that they have to “audition” to join if they want. He thinks they’d all be valuable additions, and he’s there to convince them to give it a shot. In his backpack he has a series of photos touting the group. I think finding a camera, film, and someone who knew how to develop it would be just as hard as building the walls the photos show. While Aaron explains about the walls and what’s inside them, Rick slowly walks up and socks him in the jaw, knocking him out cold.

Michonne is less than pleased with Rick, but he’s more interested in preparing for what he’s sure will be an imminent attack. The group seems divided. In searching his pack they find some food and a flare gun. Aaron wakes up now with his hands tied behind his back. Rick demands to know how many of his people are out there waiting for some sort of signal using said flare gun. Aaron rightly points out that whatever number he says won’t be believed, because they don’t trust him, even though he left them the water last week. He’s watched them long enough to see how tightly knit they are, that they don’t turn on each other even when times are tough. He admits that there’s one other person out here with him. He further offers to take them back to his community using the two cars they brought, but Rick smells an ambush. Aaron presents a very good plan for how he would actually ambush them if he wanted. Michonne offers to check out the cars, Rick doesn’t even believe there are any cars. There’s enough dissent that Rick agrees to let a team go and scout the situation. The rest of the group does what little they can to fortify their barn.

Aaron continues to proclaim that he believes Rick and his group are good people. Rick says that yes he is good, but he’ll kill other good people for the safety of his group. The scouting party discusses how much Aaron might have seen to conclude that they’re “good” to which Michonne lists off the number of people they’ve saved in their travels that they could have abandoned or killed outright. Meanwhile, Rick tries to grind acorns with a makeshift mortar and pestle while Judith screams, presumably from hunger. Aaron offers some homemade applesauce, Rick continues to be suspicious, and makes him try it first. Aarron really doesn’t want to because of some weird story about his mommy issues that comes across as super shady. But he rightly points out that if the roamers hear Judith and show up then he’ll be the first to be eaten, so why would he try to poison anyone? Aaron is very logical. This makes me like Aaron.

The scouting party finds the cars, one of which is a big RV that could hold all of them. The RV and the car are empty, but Abraham finds some Spaghetti-Os which forces him and Rosita to examine their relationship for some reason. An odd transition. Back at the barn, Rick tells Aaron they’re keeping all of his processed canned pasta, whether they go to his community or not. Michonne has had enough of Rick being hateful and declares that they are in fact going, and Rick relents. Aaron won’t tell them how to get to his community, he needs to be behind the wheel. Not happening, so he gives them a the first bit of the route. Rick wants to take a different road in the same direction even though Aaron said his group has cleared the one he just suggested. They’ll leave at dark, because it’s important to have terrible ideas and implement them poorly.

At the cars, Michonne questions Rick’s true intentions. He explains that Woodbury and Terminus seemed OK at first, and he really doesn’t want to be burned a third time, but he’s willing to go and see. In the glovebox of the car, Rick finds a bunch of license plates, which would be suspicious in a spy movie but just confusing here. Aaron says he’s trying to collect all 50 for his house, a concept Michonne balks at. She peruses his photos which show porches, and even what look like solar panels, but no people. Aaron says he took one but it was overexposed and didn’t develop properly. Michonne now joins the suspicion party and decides to ask Aaron “The Questions.” He’s killed lots of walkers, but only two people, both because they tried to kill them. Then a few things happen: Rick finds a listening dish, distracting Glen from the road right as they hit a pack of walkers covering the windshield in gore and separating the car from the RV. Should have taken the suggested route, guys. And of course because it’s a tense moment the car won’t start. Michonne hops out to pull the arms out of the engine block. From a nearby water tower a flare goes up and Aaron freaks out and runs off towards it. Michonne, Glen, and Rick pursue amidst many zombies. Nothing like headshots in the dark with a pistol while walking backwards, that’s not an unlikely thing to be able to do at all. Glen finds Aaron kicking away a walker with his hands still bound. Glen kills the walker and frees Aaron, because Glen really is the good dude Aaron said he was.

Meanwhile, Rick shoots a zombie in the head with a flare, which looks really cool. With Aaron in tow, the gang continues searching for the RV, which they find in some industrial looking warehouse place. Aaron shouts out for someone named Eric, who responds from inside where he’s wrapped up with a broken ankle. They kiss and Eric gives him a new license plate, but without the car his original collection is lost. Rick lurks out of the shadows, being a creepy beardy type. Back at the group, Aaron thanks them for their help saving Eric, and tells them his community is Alexandria (Virginia?). They decide to stay the night wherever they are, but Rick doesn’t want to let Aaron stay with Eric, which literally no one else agrees with. This seems to be leading up to a “boy do I hate being right all the time” moment.

The next morning back on the road, Noah offers Aaron some painkillers and water. He shares the story of how he got his limp, Aaron says their surgeon Pete might be able to help. It’s almost too good to be true, everybody! What could possibly go wrong? Eugene deals poker as the Washington Monument comes into view through the windshield. Abraham sees a low voltage warning but thinks the RV will pull through. It doesn’t. Glen knows that the RV carries spare batteries, which surprises Abraham. Maybe from Glen’s days as a car thief? During their pit stop, Michonne tries to talk Rick into letting go of his urge to fight everything and everyone. The RV kicks back on, but before they leave Rick needs a moment and walks into the woods. He hides a pistol in the wreckage of a house, not a bad idea, I’m guessing.

They finally arrive at the gate, Rick’s every sense on high alert, yet he’s greeted with the sound of children playing. I think they’re using almost the exact same song from 28 Days Later right now, which works for obvious reasons. They stand in front of the gate, awaiting whatever comes next. The end.

I think by and large this week lived up to the hype I had in my mind. I didn’t expect Rick to play the role of the villain as much as he did, but the show towed the line of Aaron being a creep so well that it was almost justified. Maybe it’s just me, but I feel like the sneak peak we saw last week didn’t correlate very well with this week’s episode. I don’t blame the show for wanted to do a bob and weave, but I also wonder if the scenes last week were even in the episode this week. Next week we’re told we’re going to get a lot of suburban exploration, which looks really boring if I’m being totally honest, but I’ll hope for the best. The preview for next week seemed to avoid showing any Alexandria residents, so hopefully the shots they cherry-picked for the preview don’t represent the true breadth of the episode. How about you, dear reader? Are you excited to explore the suburbs of Alexandria? Or are you bummed to see a potentially domesticated Daryl? Let’s talk about it in the comments!