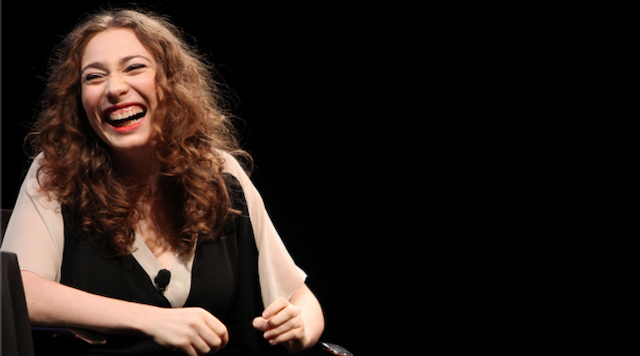 When I was in high school and the beginning of college (mid to late 2000s), Regina Spektor was one of my friends’ and my favorite singer/songwriters. Born in the Soviet Union to a Russian Jewish family, Spektor immigrated to New York City with her parents. Her passion for storytelling, language, and religious and literary themes fills her work. I’m not the first Book Riot writer to notice the literary nature of Regina Spektor’s songs. She often uses figures from the Bible, Greek mythology, and novels as her initial inspiration but then adds a surprising, creative spin. I’m most familiar with her early work, so here are a few notable examples of her unique literary style.

This is one of Spektor’s earliest songs, self-released in 2002 and then re-released on her 2006 album Begin to Hope. “Samson” seems to reference Samson from the Bible, but not Delilah, the woman who betrays him. Spektor invents an unnamed character who loves Samson before he meets Delilah. Unlike Delilah, who deprives Samson of his strength by cutting his hair, the narrator cuts Samson’s hair in a consensual, romantic moment: “I cut his hair myself one night/A pair of dull scissors in the yellow light.” She takes a familiar story about betrayal and inverts it into something totally different: a sweet story about lovers whom history and the Bible forgot.

When I first heard this song, I expected a retelling of Sophocles’s play Oedipus Rex, which we’d recently read in translation in AP English class. The song’s opening lyric immediately defied my expectations: “I’m the king’s 32nd son!” Thirty-two is an impossibly huge number of children, unless Oedipus’s father, Laius, has many wives and concubines. In the myth, Laius has only one wife. Or maybe it’s a symbolic number or a pun. As with Samson, Spektor takes familiar figures and puts her own imaginative spin on them.

This song is from Spektor’s 2003 album, Soviet Kitsch. I always interpreted the title as a reference to the Ghost of Christmas Future from Charles Dickens’s A Christmas Carol. In this light, hilarious song, the ghost gives a harried businessman advice for stressing less and enjoying life more. Like Scrooge, the businessman gets a chance to change his outlook on life.

The opening lyric of this song is a reference to Billie Holiday’s 1956 autobiography, Lady Sings the Blues. Lady Day was one of Holiday’s nicknames. The song is a tribute to Holiday, imagining how her intimate jazz club performances could move audiences to tears.

From Spektor’s 2009 album Far, “Blue Lips” imagines a man’s search for faith and connection. It references the tree of knowledge of good and evil from Genesis, the first book of the Bible. Another song from the same album, “Laughing With,” also discusses belief in God from a different angle.

This 2006 song was later used in a pivotal scene in the 2009 movie (500) Days of Summer. It has another reference to the Biblical Book of Genesis: “Hey, open wide, here comes Original Sin!” Later Spektor sings: “I’m the hero of this story/Don’t need to be saved!” The narrator is conscious that she’s in a story and has agency.

I love how intertextual Regina Spektor’s songs are, with so many literary and religious allusions. I don’t consider literature, or certain genres of it, superior or inferior to other art forms, like music, painting, or movies. I read Spektor, Billie Holiday, Leonard Cohen, Rufus Wainwright, and many other singer-songwriters’ lyrics and interpret them as poems.