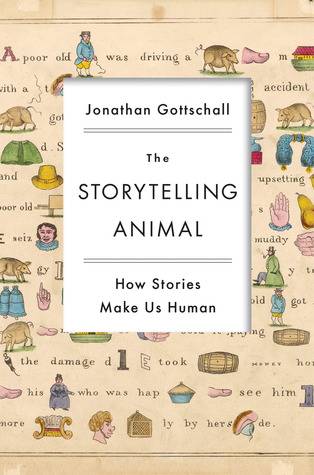 Jonathan Gottschall teaches English and writes books at the intersection of science and art. His work has been featured in outlets like The New York Times Magazine, The New York Times, Scientific American Mind, New Scientist, The Chronicle of Higher Education, Nature, Science, BBC Radio and NPR. His blog, The Storytelling Animal, is featured at Psychology Today, and he also blogs at The Huffington Post. He lives with his wife and two young daughters in Washington, Pennsylvania. His new book, The Storytelling Animal: How Stories Make Us Human, developed from his blog, was recently released from Houghton Mifflin Harcourt.

BOOKRIOT:: We don’t ask every interviewee this, but it seems relevant, here: What is a book?

Jonathan Gottschall: Well believe it or not, I haven’t thought very much about it! That’s one of those questions that’s really in flux right now. To me, content really trumps form. Anyone who believes digital books aren’t books has spent too much time in musty old libraries. I will be very sad if the physical article of the book fades away. I personally still read in paper. I only go to the Kindle if I can’t get or afford the hard copy. But I still like the physical nature, smell, and feel of paper books, and I scrawl all over them if I feel like it–but it wouldn’t be the end of the book or the end of storytelling if they disappeared. We’re storytelling animals, and there were books long before writing was invented.

BR: What are you reading?

JG: I’m reading my book! It’s terrible when you write a book–it takes so long to go through the publication process, that by the time launch day arrives, you’ve forgotten everything. I finished writing two years ago, so right now I’m going through and reading so that I’ll be ready for interviews.

We were just speaking about the future of the book and its form, so I should say now that I’ve done most of my pleasure reading over the last five years via audiobooks. I’m a massive consumer of audiobooks and listen to them for at least two or three hours a day, sometimes more: While I’m doing the dishes, having lunch, driving… Right now my audiobook is George R. R. Martin’s A Game of Thrones and I’m liking it very much. Martin has a huge imagination.

Listening to audiobooks, it’s like being a kid again! Some of my best memories of my dad, who was the reader in our family, are of reading out loud and of being read to. It’s true that while there are tons of pros to audiobooks, there are some cons–like pacing. I find my mind wanders more while I’m listening than when I’m reading on a page, but that’s why I restrict audiobooks to pleasure reading.

JG: Oh, there’s millions of them. Millions! I’m so full of gratitude and envy towards so many different writers. Just about any book I read will lead me to say boy, I wish I was good enough to write something like that. But I’m particularly amazed by the way that novels can reach through the page and move us and change us, so I think I’d have to say I wish I’d written The Road. Cormac McCarthy’s novel affected me so much; I’d love to wield some of that power.

JG: Lately I’ve been recommending a lot, out of the lit world, Chris McDougall’s Born to Run. I love to run, but as I got older, I found myself beat to pieces. But then I ran across McDougall’s book and found it really intriguing. He argues that we’re actually sort of designed for running and that the villain behind broken-down runners’ bodies is the shoes we’re wearing. He believes that we’re the animals most developed for long-distance running because we’re the only mammals who are built to shed heat efficiently.

BR: Which book do you re-read regularly?

JG: The books that I’ve read the most are The Iliad and The Odyssey. I go back to them periodically on my own, and occasionally listen to them, too.

JG: I don’t have one place. I read wherever I am. Oftentimes, I’m literally moving around, listening to my book, wherever it fits into my life. Study. Kitchen table. Sometimes w/earplugs. Backyard, back porch, swing set–everywhere.

BR: Has a book ever utterly disappointed you? How?

JG: I’m sure they have. Am I allowed to talk about books I hated? One that I truly hated was The Girl with the Dragon Tattoo and its sequels, because to me it had so much unctuous, greasy, condescending political subtext and meanness towards women–but oh boy, let’s LOOK at it! I didn’t get it, didn’t admire it, didn’t envy it.

BR: Which book has changed your life?

JG: When I was in my early 20s, I read Richard Dawkins’ books on evolutionary biology–and then picked up one of my most-studied texts, The Iliad, and found that it unfolded to me differently than it would have had I not been reading about the biological sciences. I re-saw the story as a great drama of naked apes, of these beasts beating their chests and arguing and competing. I ended up doing my doctoral dissertation from this point of view, and it launched my career.