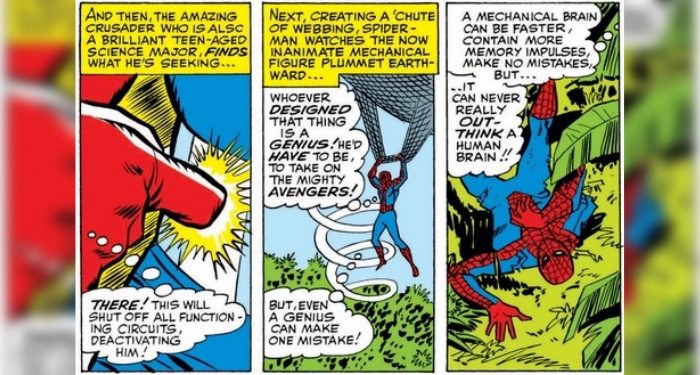 Robots in comic books seem to have only two settings: help or murder. And when they come dressed like our favorite heroes, they’re probably set to murder: it usually means the robot plans to trick others into accepting them as someone they’re not and destroying someone on behalf of a tech-minded supervillain. Other villains may try to replace our hero with an alien, and others may steal a little DNA and make a super-clone with varying degrees of scruples — both perfectly fine methods, but we’re focusing exclusively on mechanical copies today. (Mostly because I don’t feel like dealing with the Clone Saga right now. Someday, I promise.)

One thing you may notice about early human vs. robot adventures is the heroes’ cavalier attitude towards their inorganic foes. All of these heroes have strict no-killing codes, yet they have no trouble annihilating their robot double, despite the fact that all of the robots here show great intelligence and, in some cases, independent thought. One wonders what AIs like the Vision would think of all this robo-slaughter.

Enough with the philosophy! Let’s take a look at just a few of the times our heroes have totally wasted their robot doubles.

Throw Him on the Floor

The Avengers’ first encounter with Spider-Man wasn’t a sparkling one. Kang the Conquerer, super-menace from the future, created a perfect robotic replica of our friendly neighborhood Spider-guy to infiltrate the Avengers.

When the actual Spidey realized there was a phony running around, he was none too pleased. So he followed the Avengers to Mexico, where the Spider-bot had led the Avengers, and did battle with his other self. The fight ends with the robot falling to his apparent demise, which seems pretty harsh.

Superman is one of the few heroes who proactively chose to replace himself with a robot. He’s got a whole army of Superman robots, which he uses to guard the Fortress of Solitude, defeat bad guys, and mess with his friends’ heads.

Action Comics #350 saw a Superman robot put to a different use: Robot K-31 was tasked with performing all of Superman/Clark Kent’s regular duties while the original journeyed a million years into Earth’s distant past for reasons. Superman was rendered powerless due to ancient Earth’s red sun (which was not a thing, but okay) and unable to return home. Fortunately, K-31 came to retrieve him, but not before Supes took down a caveman scammer.

What more logical hero to be replaced by a robot than Iron Man? It’s happened several times, too. In one early misadventure, found in Iron Man #17–18, Tony Stark comes home one day to discover that a Life Model Decoy (an extra-fancy robot) has been given life through an electrical explosion a la Short Circuit and taken over his identity.

With the LMD insisting that the real Tony is actually a fake Tony, our hero finds himself friendless and on the run. He is eventually able to defeat the LMD by donning some vintage Iron Man armor and destroying him in combat, though the fight damages his heart badly enough to require a transplant.

Agree With Them, Kind Of

Superman and Booster Gold — one the epitome of altruism, the other a “corporate hero” out for profit — never quite see eye to eye. But when Booster publicly accuses Superman of crimes against humanity, kidnaps and tortures a woman, and then handily beats up Superman in Action Comics #594, everyone is surprised. Including Booster Gold, because this is not him.

The belligerent Booster-bot was created by (say it with me now) Lex Luthor in a scheme to discredit both heroes. That said, there was a grain of veracity in Booster-bot’s accusations: Superman had invaded the nation of Qurac, and the real Booster did not like that at all. But, as Booster points out, he will happily tell this to Superman’s face rather than host nasty press conferences.

Fall into a Trap (and Foretell the Future)

After anguished years of assuming his teen sidekick Bucky was KIA, Captain America receives a mysterious tip telling him that Bucky is alive and well. Racing to the scene, Cap finds Bucky, but not as he remembered him. Now older and apparently brainwashed by villainous forces, Bucky is determined to take Cap down for good.

In case you hadn’t guessed, I am not discussing the famous “Winter Soldier” storyline, but Tales of Suspense #88. This “Bucky” was the robot creation of Red Skull, who used it to lure Cap to his hideaway off the coast of Canada prior to threatening the world with, uh, giant bubbles. But it’s amusing how close the creators (Stan Lee and Gil Kane) came to predicting Bucky’s actual return to life decades later.