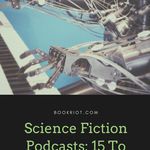 I’ve divided this list into two categories. First, we have podcasts about science fiction. These are your podcasts where hosts sit and chat about different sci-fi topics. If you’re looking for fictional podcasts that tell a science fiction story, head to the second half of this list where I share some of the best science fiction audio dramas. Onward!

This is Book Riot’s very own science fiction and fantasy podcast. SFF Yeah! is a biweekly podcast that covers the latest news from the sci-fi/fantasy literary world. And of course, hosts Sharifah and Jenn also discuss lots of sci-fi/fantasy books. Listener, are you afraid of your TBR pile exploding from too many good book recommendations? Enter at your own risk.

This science fiction podcast is dedicated to reading and reviewing Hugo Award winning books. Host Seth Heasley is a self-proclaimed book nerd looking to improve his “Geek Quotient” by getting through a bunch of great sci-fi books. If you want to see what novels the show has covered so far and which ones he’s still planning on doing, check out this handy dandy list. Seth has a different guest on every episode, which keeps things interesting and invites lots of fresh perspectives on the genre.

From award winning science fiction literature, we move on to…something else. In this podcast, hosts Conor Lastowka and Michael J. Nelson dedicate their time to  reading books they’re pretty sure they’re going to hate. Think How Did This Get Made? but for books instead of movies. And the majority of the books they choose are science fiction and/or fantasy.

This podcast takes science fiction, looks to the future, and speculates about how much of it could eventually turn into science fact. In each episode, host Rose Eveleth takes on a possible (or not so possible) future scenario. Some examples of recent topics on the podcast: a future where we can travel through time; a future where China replaces the United States as the global superpower; a future where moms have convinced the United States to shut off the Internet. The topics are wide-ranging and fascinating.

Spectology is a sci-fi book club but in podcast form. Each month, hosts Matt and Adrian choose a speculative fiction book to read, and they discuss their feelings about the book and its themes on the podcast. They also do bonus episodes where they give other science fiction recommendations. Recently, they did an episode discussing their favorite sci-fi aliens.

SFF Audio is a website that was created to tell the world about Sci-Fi/Fantasy audio content. Their podcast features discussions about Science Fiction and Fantasy with contributors and other podcasters, bloggers, scholars, and writers. The podcast features two types of episodes. “READ ALONG” episodes are where they close read and discuss a text. “TOPIC” episodes feature a focused discussion of a narrow subject in SFF.

On Sword & Laser, hosts Veronica Belmont and Tom Merritt pick a science fiction or fantasy book every month to discuss on the show. Their most recent book pick was This is How You Lose the Time War by Amal El-Mohtar and Max Gladstone. The show also includes interviews, sci-fi/fantasy news, and they even did a SFF March Madness bracket.

Imaginary Worlds is a bi-weekly podcast hosted by Eric Molinsky. You might recognize Molinksy’s name from his work on NPR. On his podcast Imaginary Worlds, Molinsky talks with novelists, screenwriters, comic book artists, filmmakers, and game designers about the process of crafting fictional worlds. Imaginary Worlds also examines the science fiction fan’s role in cultivating these imaginary worlds by buying into the “reality” of science fiction.

Most of the aforementioned podcasts are hosted by self-professed sci-fi nerds. Not so with the final podcast on this half of the list. Hosts/comedians Lauren Lapkus and Nicole Byer have never seen Star Wars and they know nothing about the movies or the culture surrounding the franchise. On this series, they are making their way through all Star Wars content by release date order. Every week, they’re joined by a co-host who does know a thing or two about Star Wars.

Mission to Zyxx is a improvised science fiction podcast, created and performed by Jeremy Bent, Alden Ford, Allie Kokesh, Seth Lind, Winston Noel, and Moujan Zolfaghari. These improvisers all met at the Upright Citizens Brigade Theatre in New York City, and on the podcast they each play a member of the Federated Alliance. Each episode features a special guest comedian who plays an inhabitant of the Zyxx Quadrant unlucky enough to encounter the Federated Alliance crew.

Be sure to listen to this one with headphones on. A World Where is a binaural radio drama series. Each episode imagines a different near-future scenario and the consequences of contemporary issues on future events, such as climate change, capitalist excess, and neoliberal apathy. These are stories of normal people living in a near-future world that isn’t too dissimilar from our own.

On Marsfall, we follow a group of colonists who settle on Mars in the year 2047. Each episode continues the story from the perspective of a different colonist. The cast of characters is thoughtfully developed and well-acted, and of course, we learn more and more about each one as the show goes on. The colony is helmed by commander Jacki O’Rania, and assisted by the colonial artificial intelligence unit ANDI.

This is a brand new podcast that just launched in March of this year, and already it’s been picked up by Amazon to become a TV series. Hopefully the show will also star Tessa Thompson, the lead actress on the podcast. In the podcast, Thompson plays an idealistic young journalist trying to make a name for herself by following a group of paranormal explorers. The explorers have become obsessed with something known as the Left/Right Game. But as the journalist and explorers delve deeper into the world of the game, they realize they’re in way over their heads.

This is the only podcast on this list that’s already finished, but this one is so good that I had to include it anyway. And if you haven’t discovered this one yet, now it’s the perfect time to just marathon the whole podcast. Wolf 359 is part space adventure, part character drama, and part absurdist sitcom. This is the story of Doug Eiffel who is stuck on a scientific survey mission of indeterminate length, 7.8 light years from Earth. Accompanying him on this mission is a small, strange cast of characters: stern mission chief Minkowski, insane science officer Hilbert, and Hephaestus Station’s sentient, often malfunctioning operating system HERA. As the crew searches for alien life, they begin to realize there is more to this mission than they originally thought.

Last, but not least! From the creators of Welcome to Night Vale comes Within the Wires. This podcast is stories from an alternate universe, told through found audio. Each season tells a different story, and there are four complete seasons currently available. The most recent season tells the story of a mother and daughter living in an anti-government commune living in a remote Scandinavian forest.