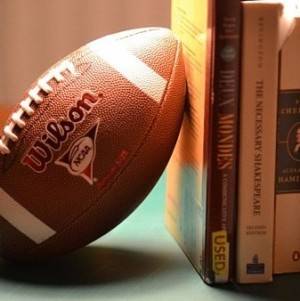 This past Monday was Opening Day for the inaugural season of Book Riot Fantasy Authorball. You’ve never seen eight people more excited about a fantasy “sports” league, I assure you. After the original post appeared last Wednesday, we spent the next several days organizing our league. We collected eight (extraordinarily eager) Book Rioters to populate our league, conducted our draft, talked a fair amount of smack, and geared up for the season.

So here are some tips and tricks that worked for us (and some things we learned) — and of course, if you’ve done this, too, we’d love to hear what has worked well for you.

1. Once we had our eight players, we set up a Glassboard message board for the league. This was and will be the place to go for all league news. It’s also what we used to conduct the draft. (Glassboard works well for us because we use it for other Riot chatter as well, but you may choose to conduct the draft via email, gChat, Skype or however else you can get all the players in your league in the same virtual spot. The best option — and if anyone does this, please tell us about — is to do an in-person draft. But that may be difficult.)

3. Also, determine a specific start and stop date for your season. We’re going with August 4, 2014 thru May 31, 2015. It’s a long season — you know, it’s a marathon, not a sprint. (It’s important to determine this before the draft, because it could influence drafting strategy — if, say, you know an author is publishing a book at future date, you want to make sure it falls within your season.)

4. Create a document (here’s ours—feel free to copy and paste) that has all the eligible authors listed, so you can check off authors as they’re drafted. Additionally, the commissioner should keep track of the order and each player’s team as each author is drafted, so nothing goes awry — remember, you’re only allowed one author per Group. This only happened a few times in our draft (a player drafted out of order, and we had to stop and back up; a player drafted an author from a group he’d already drafted. Both received the appropriately severe reprimand, and then we moved on.) Here’s how our team sheet looks when we were finished.

5. A thing we learned: You may want to add a few more authors to each group (this can be the commissioner’s job). If there are eight players in your league, add at least two more authors for each group. Why? Because you have to draft one player from each group, and assuming your league has eight players, when there is only one author left in a group, by default, the player who hasn’t drafted from that group is stuck with the last author left. This, we learned, takes some of the fun, strategy, and drama out of the later rounds.

6. Another thing we learned: When the eight rounds of the draft are complete, do a “free agent” author draft. Here, each player can select an author not in the pool of authors (or that was undrafted in the first eight rounds, if you added authors). This free agent draft (we did two rounds, so each team now has a total of 10 authors) was a lot of fun, as we all tried to get really creative about why we’d pick particular free agent authors.

7. Once your draft is complete (or before, if inspiration strikes), come up with an awesome name for your team. Our league excelled at this — most notably, Riot editor Jeff’s team: “White Men Can’t Jhumpa.”

8. Set up a way to keep score. We’re doing ours basically on the honor system. Each player, in his/her own sheet on a shared Google Doc, will identify the scoring “event” and keep a running tally of his/her points. The commissioner will update the league standings (as well as make rulings on any questionable scoring events) every Monday morning. Here is our complete league scoring spreadsheet, with the sheets for each player, a sheet that has the scoring system, a sheet that will eventually have the weekly standings, and a sample of how players should keep score.

9. Determine a prize for the winner. Each player can throw in some cash to buy a gift certificate for books, or a nice bottle of booze, etc. Or you can just play for fun. (But is that really THAT fun?)

10. Set up Google Alerts for all the authors on your team. This will save you a tremendous amount of time trying comb the Internet to figure out when your authors scored points.

11. Game on! Continue to talk smack. And have fun! Please keep us updated on how your league goes. And feel free to ask any questions or make suggestions in the comments below.