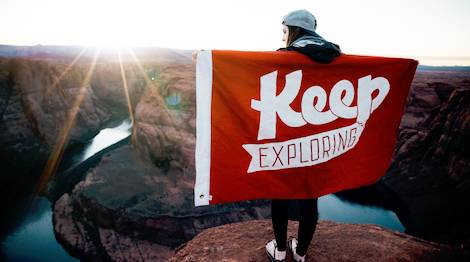 It’s so interesting to decide how to define adventure, and what we believe should be included in this genre. For some, it requires first-hand accounts of the mountaineering-skydiving-waterfall jumping-lifestyle. For others, it’s all about simply breaking expectations and aiming for excitement and change rather than contentment in daily consistency or predictability. So what is it for you? I’ve tried to include a list here of nonfiction adventure books about internal thought, external challenges, and physical daring.

Please note: You don’t want to take the word “adventure” lightly here. In U.S. film especially, adventure has come to imply a lightheartedness that is often difficult to find in the realities of nonfiction. So, while some of the following works can be about dark subjects in the lightest of ways (Thanks, Sarah Vowell) other works use adventure as an attempt at escape from relentless reality (Here’s to you, Cheryl Strayed).

Also note: There’s an interesting theme in travel writing of tourism in other cultures. This can open eyes to the world, but it can also give an outsider’s viewpoint on a culture. Go into any book you read with eyes wide open to what perspective does.

Anyway, here’s 100 must-read nonfiction adventure books based on real-life boldness that you can read in your daily life comfort if you choose.

What are your favorite nonfiction adventure books?