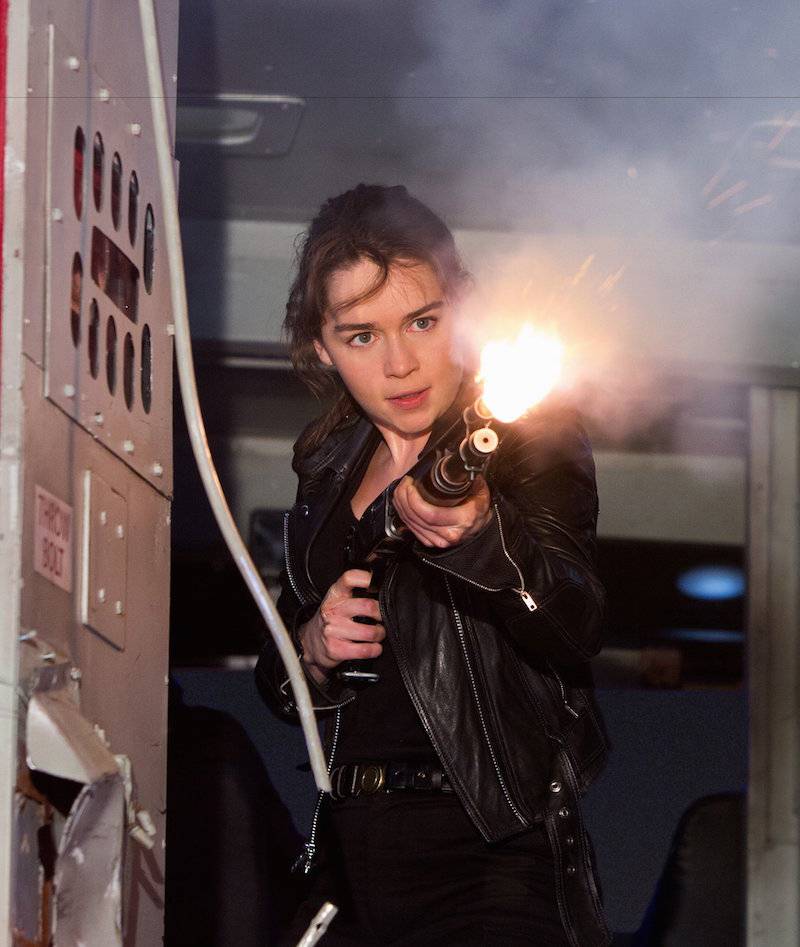 With Terminator Genisys out, Sarah Connor fans now have three films, a TV show, and comics to inspire their cosplay. Below we take a look at some of the iconic outfits and prepare to kick some robot ass as Our Lady of the Apocalypse.

Go big or go home, especially when it comes to the hair, eye makeup, and jacket shoulders! It was the ’80s, after all. This is the Sarah Connor who finds herself in the middle of an impossible situation, falls in love, and survives to tell the tale and flee to Mexico. She may look soft, but she’s got a core of steel.

This is the Sarah Connor who does pull-ups in prison, who carves up picnic tables with her knife, who is packing All. The. Guns. Get your military-issue tank-top and pants and break out the utility belt! You have practically-invincible robots to kill and a future Messiah to train.

Thanks to the continued application of time travel, Genisys‘ Connor skips the big hair and pink tie-dye and goes straight to the black and the leather. All the leather, all the black, and all the guns. The Mother of the Future can’t be seen in shoulder pads in this day and age, now can she? Take the ponytail of T2 and chic up the look, and you’re good to go.

I confess it, friends: Sarah Connor Chronicles‘ Sarah is my second favorite after T1. Those brown boots! That double-layered tanktop situation! This is a Sarah Connor who is ready to rumble, knows her trigger discipline, but also understands that walking into a convenience store in full combat gear is more likely than not to trigger Skynet’s video-feed alarms. She’s definitely not a soccer mom, but she’s also not preparing for a full-on tactical assault. OR IS SHE?? (Although you will never get that layered cut into a ponytail, but no one is perfect.)

The less said about certain artists’ renditions of Sarah Connor (visible thong? REALLY?), the better. Others stuck pretty close to the live-action versions though, so the above are safe bets.

Bonus: Terminator Make-Up
What if you’d rather rule the world than save it?
For the hard-core and super-ambitious: