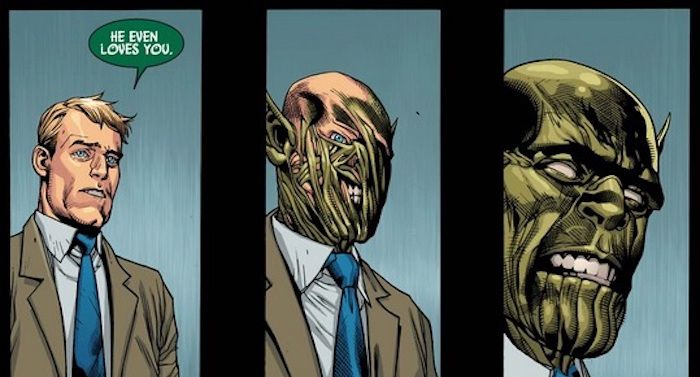 Aliens in superhero comics seem to come in one of two flavors: helpful or genocidal. Superman and Captain Marvel typify the former category (although on a bad day, they have been known to go feral on their friends). The aliens on this list represent the latter. They are made even more dangerous by the fact that they can alter their appearance to resemble other people — even our heroes — so well that not even their loved ones can tell the difference. Being replaced for even a short time can have a devastating effect on the public’s trust in a hero or on the ability of a super-team to work together against real threats.

It’s not surprising that superhero comics would want to exploit shapeshifters in this way. After all, they already depend heavily on themes of identity and alter egos, so what better foe for our valiant defenders to face than someone who takes the concept of secrecy to a scary extreme? More to the point, what do you do when even your closest friends might be someone else? Let’s take a look…and then maybe take a look at the person next to you. They might not be who they claim to be!

Poor, poor Swordsman. After fighting the Avengers multiple times, he turned over a new leaf with the help of his mysterious girlfriend, Mantis…who soon grew disgusted with him and threw him over for the Vision (who was not remotely interested), only to feel remorse when Swordsman sacrificed his life for hers.

But fear not! An alien tree has the hots for Mantis and, as an engagement present, possesses the Swordsman’s corpse so they can make sweet human babies together. This is music to Mantis’s ears, and she accepts his marriage proposal. Who says romance is dead?

Let Them Hang Around

It’s a peaceful day in Wonder Woman #106 when young Wonder Girl (that is, Diana as a teenager, not Diana’s sidekick Donna) starts acting strangely. The Amazons soon figure out why: this is not Wonder Girl! It’s an alien “chameleon girl” named Rrara who decided to swap places with Wonder Girl for funsies.

The fun comes to an end when Rrara brings Wonder Girl back, only to realize that she herself cannot go home thanks to a cosmic dust storm that has enveloped her home world. Naturally, the Amazons promise to find her a way home, but she never appeared in the comics again. Did Wondy manage to keep her promise, or is Rrara still hanging around Themyscira, marooned millions of miles from home?

Storm Off in a Huff

In one of their earliest adventures, the Avengers encountered a villain called the Space Phantom, but it took them a while to realize this. The Space Phantom had the power to shapeshift into anyone while sending the original being into limbo. When he started imitating Avengers, chaos ensued.

The Space Phantom’s shenanigans tore open the preexisting rifts between the newbie Avengers. In particular, the Hulk felt like no one liked or trusted him (because they did not) and abruptly left the team. It took decades for him to rejoin.

The Manhunters are a fun bunch of aliens. They don’t even like superheroes! They especially have it out for the Guardians of the Universe. So when the Guardians were about to be reformed in the “Millennium” event, the Manhunters hatched a plan to stop it.

Being hi-tech robots, the Manhunters found it easy to create android duplicates of many people on Earth, including superheroes like the Justice League’s Rocket Red. Fortunately, the heroes of Earth had more than enough power between them to hit the Manhunters where they live (that is, their home planet) and get all their friends back.

The Skrulls, a sneaky race of shapeshifting aliens, have plagued Marvel’s heroes since the ’60s. But it was 2008’s Secret Invasion that allowed them a company-wide spotlight for their evil deeds: a Skrull contingent managed to slowly infiltrate the ranks of Earth’s mightiest heroes in preparation for a full-on invasion.

Unable to trust even their closest friends and allies, heroes of all stripes struggled to figure out which of their friends were real — or if they themselves were secret Skrulls. Even after these questions were sorted out, the damage done by this storyline, when compounded with Civil War from a few years prior, would haunt the characters for years to come. And why not? Is there anything more viscerally horrifying than finding out the people you trust with your life aren’t who you thought, whether literally or figuratively?