You never know what's out to get you. Though you might think you're safe from monsters and menaces, everyday objects can turn against you, too. A mysterious microwave. A threatening board game. A snowman that refuses to melt.

Master storyteller Josh Allen brings thirteen nightmare scenarios to life in this page-turning collection that's perfect for budding horror junkies. In his wondrous world, danger waits behind every doorway . . . even in the most ordinary places.

Eerie illustrations by award-winning artist Sarah Coleman accompany the stories, packaged in a stunning hardcover edition with glow-in-the-dark jacket. Readers will sleep with one eye open! 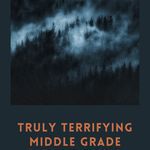 Think middle grade readers aren’t brave enough handle creepy stories? Clearly you haven’t been around enough middle graders lately. Kids love to get scared. Way, way, way back in the day when I was a middle grader (yes, somehow I can still remember that far back), we had books like R.L Stine’s Goosebumps series and Alvin Scwartz’s Scary Stories to Tell in the Dark books, featuring those horrifying illustrations by Stephen Gammell. And when I was 10 years old, I read my first Stephen King novel. I was super brave and got through the whole thing with nary a nightmare, and I felt like a cool grown up.

But here’s the thing. Middle grade readers might be even braver than grown up readers. Because the stories told in middle grade horror books are truly terrifying. These stories don’t hold back. From ghosts to zombies, from dark atmospheric mansions to deeply unsettling mysteries, these novels hit every nerve to delight and horrify. And middle graders can absolutely handle it! These kids are fearless, and with Halloween coming up, they’re craving the kinds of scary stories that will capture their imagination. Here are nine truly terrifying books for fearless middle grade readers. And yes, adults are going to love (and be afraid of) these books too!

This is a new middle grade novel based in history, ghosts, and Black Girl Magic. Root Magic is set in 1963. Jezebel Turner’s grandmother just passed away, and and school integration is coming to South Carolina. But the biggest change for Jez and her twin brother Jay? Their uncle begins to train them in rootwork. Suddenly, a whole world of magic opens up to Jez. And just in time, too, because a dark, supernatural force has come to town. Jez will need every bit of her magic to fight against the evil — both natural and supernatural — that’s all around her.

In the dark and mysterious thriller Deadman’s Castle, Igor and his family are on the run. Ever since Igor’s father witnessed a horrifying crime, a strange figure known only as the Lizard Man has been hunting Igor’s family. But now Igor is 12, and he’s tired of running. And he’s starting to wonder if the Lizard Man is even real, or if it’s just a figment of his father’s paranoid imagination. So Igor starts trying to live like other kids his age, but as he starts to relax, strange things start happening all around him. Could it be that the Lizard Man is real after all?

What Lives in the Woods by Lindsay Currie

Scary old manors and mysterious creatures living in the woods? Seems like the perfect setting for a scary story. In What Lives in the Woods, Ginny Anderson’s father surprises the family with a month-long trip to Michigan. But rather than staying in a hotel like a normal family, Ginny’s family stays in a giant 26 room manor out in the middle of the woods. People claim the woods are filled with mutant animals that escaped from a mad scientist years ago. And there are also whispers that campers keep disappearing never to be seen again. But are the rumors true?

Love ghost stories? So does Zee Pucket, and in Ghost Girl, she gets to live out her own. It all starts when Zee wakes up one morning and finds that people are missing. There’s a creepy new principal who knows everyone’s darkest dreams. Large scary dogs talk to Zee, and there’s even a ghost. Everything is out of sorts, and no one believes Zee except for her best friend Elijah. The rest of the kids at school make fun of Zee and call her “Ghost Girl.” But if she wants to save her town, Zee will have to embrace the name Ghost Girl and everything that makes her different.

Whispering Pines is the first novel in a creepy new middle grade series. After Rae’s father goes missing, Rae and her mother move to Whispering Pines for a fresh start. But Whispering Pines isn’t your average town. Strange things are always happening here. Soon, Rae befriends a boy named Caden, whose mom runs a ghost hunting business. When several kids go missing and then return like zombies with their eyes removed, Caden and Rae will have to work together to set things right.

Paola Santiago and the Rive of Tears by Tehlor Kay Mejia

If you’re loving middle grade horror series, here’s another one you should check out. In this first book in the series, Paola Santiago confronts La Llorona, a ghost of a crying woman who wanders the banks of the Gila every night. Pao is the type of person who has always believed in science and logic, so when she comes face-to-face with a real life mythological figure, she doesn’t know what to think at first.

Suee and the Shadow by Ginger Ly and Molly Park

Suee and the Shadow is a middle grade graphic novel you won’t want to put down until its terrifying conclusion. When Suee hears a strange voice talking to her at school and realizes it’s her own shadow come to life, how would she have guessed that would only be the beginning? From there, strange things keep happening. Her classmates are turning into zombies, and as Suee tries to investigate what’s happening, her shadow keeps getting stronger and stronger.

Ophie’s Ghost is bestselling author Justina Ireland’s middle grade debut. This book is set in Pittsburgh in the 1920s. Young Ophelia (Ophie) Harrison can see ghosts. So when Ophie gets a job as a maid at Daffodil Manor, of course she sees ghosts everywhere. She even befriends a ghost whose life was tragically taken too soon, and Ophie starts to wonder if there’s anything she can do to help. But not all ghosts are friendly, and Daffodil Manor is filled with secrets.

The Dollhouse: A Ghost Story by Charis Cotter

If you’re not scared of doll houses after watching Sharp Objects and/or Hereditary, then maybe Charis Cotter’s The Dollhouse: A Ghost Story will do it for you. This is another creepy horror novel that takes place in a scary old mansion, because we can’t get enough of scary old mansions. Alice and her mom have just moved into this big old house so that Alice’s mom can be a live-in nurse for a rich elderly lady. And, sure, the house is super creepy, but what’s even more unsettling is what she finds in the attic — a dollhouse that’s an exact replica of the house. And then the dollhouse starts to change…

If you’re looking for more super scary horror novels for middle grade readers, here are even more titles for the bravest of the brave. And here are 10 of the best young adult horror novels to give you the chills. We’ve got lots of horror recommendations for you…if you dare.