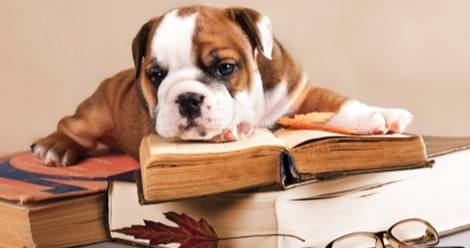 Have you ever been attacked by a dog while on your way to a job interview? If not, let me take this opportunity to tell you that it’s not a fun experience, despite what you might read on the internet. What it did do was force me to drum up some courage, using books, no less.

It was a cool March afternoon and I was running late. I was wearing a light jacket and my hands were tucked firmly into its pockets to protect them from what the English consider cold weather. As I hurried down the sidewalk I neared a woman and her large poodle waiting to cross the street. I could see the dog regarding me cautiously out of the corner of its eye and as I passed, then it spun around, bit through my jacket and into my right hand.

Not only did it bite my hand, it decided that it didn’t want to let go of it, probably forever. In that moment my vision became ultra-focused, time ground down to a dull vibration and a single thought entered my head. It was the kind of thought that Marlon Brando describes in the film Apocalypse Now as a “diamond bullet right through my forehead.”

That thought was: “I’m going to have to punch this dog in the face.”

Thankfully, the dog’s owner managed to call it off of me before such drastic actions needed to be taken. Everything was fine. Well, except for my hand, it looked like I’d been wearing a cheese grater as a mitten.

Did I get angry? Did I say something rude to the owner of The Return of Cujo? No, I told her in a very Canadian way, “not to worry about it,” and walked away.

Luckily, there was a pharmacy nearby. Unluckily, I had no money to buy anything. I decided to appeal to the guy at the counter for mercy.


Category ID: 867
“Hello, I need a Band-Aid,” I said to him, holding up my dripping hand for effect. “And not the Bob Geldof kind.”

“Plasters are over there,” he said, pointing to the back of the store. Neither the sight of my bloodied hand or my lame attempt at humour did anything to remove the boredom from his voice.

“This generation!” I thought.

“Yeah, see, that’s the problem, I only need one Band-Aid, probably a big one.”

“We don’t sell them individually, you’d have to buy a pack.”
“Yeah, that’s my other problem, I don’t have any money. Do you have one lying around behind the counter that I could use?”
Something I learned in that moment: When you are practically begging someone for help and they start speaking to you in short, clipped sentences like “Sir, I can’t…I don’t…I’m not able to…” You are screwed.

I walked back onto the sidewalk. I was getting desperate, but it wasn’t time to give up. I ran into a nearby pub, grabbed a handful of napkins from the counter and ran back outside. I then tied said napkins as best I could around my injured hand with previously-used dental floss that I found in my backpack.

I won’t lie, it looked bad. Really, really bad, but I didn’t give up. I told myself it was going to be fine, just as long as the interviewers didn’t look at or ask to shake my hand.

Where did this courage come from? Thanks for asking, I can tell you, it wasn’t something that I learned from some fancy app. It was from books. That week I had started a book called The Teachings of Don Juan by Carlos Castaneda.

Now, I’ll admit, Castanada may have made the entire “meeting a shaman who gave me mystical powers” thing up, but, I did take a few gems away from that novel, primarily this quote on courage:

“When one has nothing to lose, one becomes courageous. We are timid only when there is something we can still cling to.” 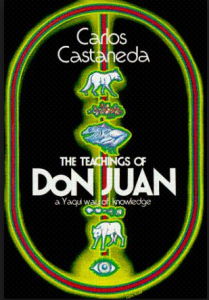 “You have everything needed for the extravagant journey that is your life. Except Band-Aids.”

So, armed with that quote, I went into the job interview with my head held high and my hand held awkwardly behind my back. I had found some courage. What happened next is another story on its own, but I’d be curious to know if anyone uses books to give them courage in everyday life and if so, which ones?