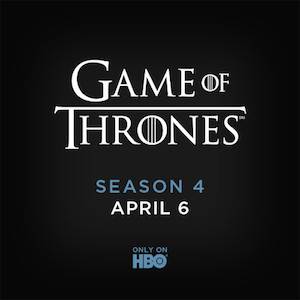 Trigger and spoiler warnings for you to use as needed.

Also, frank sexual and menstruation talk, if that sort of thing bothers you.

It’s still April, which is Sexual Assault Awareness Month, so I’m going to rant about That Scene from this week’s Game of Thrones.

I’ve spent the last roughly thirty-six hours trying to process my feelings about the change to Jaime and Cersei’s scene in the sept. I’ve avoided reading reviews because I knew I had this one to write and I don’t like the thought of inadvertently stealing someone else’s words that have burrowed into my brain. (And, honestly, even when I do read other reviewers’ takes on the episode, I’ll stay away from the comments sections. Who needs to see yet another “she deserved it,” the inevitable conclusion of a certain cruel internet type.)

I still don’t know how I feel. Outraged? Kind of. Annoyed feels sort of right, but a little dismissive. I’m landing somewhere in the middle of confused, disappointed, and not remotely surprised.

I don’t understand why HBO (as I will refer to the showrunners, writer, director, all involved in the making of this episode’s altered-for-the-worse storyline) made this change.

At that point in the book, Jaime has only just returned to King’s Landing after losing his hand and rescuing Brienne. He sees Cersei in the sept, alone with Joffrey’s corpse, and in a confused haze of reunion joy and shared grief over their firstborn, they have sex. I talked to a few fellow feminist friends about the way that scene is written—Cersei protests as Jaime keeps going—and we all agreed that we’d read it as her being afraid of getting caught by the priests as well as letting Jaime know that no, she would not give up her shaky grip on power as the widowed Queen by marrying him and living openly as the Targaryens had done.

Their relationship is already pretty screwed up. I mean, they’re willingly participating in incest that has produced more than one child. They have sex while Cersei’s “moon blood [is] on her,” in a church, near the body of their dead firstborn son. That particular scene didn’t need much help to be super disturbing. (And I’m disturbed by the fact that I fear more people would’ve been disgusted and outraged by knowing it was supposed to be period sex, not rape.) (I did tell you we were going to talk about menstruation.)

Still, in the book, it reads as consensual; while Cersei isn’t thrilled at where they’re doing it, it’s the first time they’ve seen each other in months and she’s so relieved he’s back so they can share their grief that she wants the absolute nearness of sex with him. Complex feelings—and the thrill of maybe getting caught—lead to a rough quickie, a pretty human thing. Raping the mother of your child in front of his body is a pretty monstrous one. For all his flaws, and there are many, Book Jaime has never gone full monster. Show Jaime just did.

What could HBO’s motivation be for making this change? Rape for shock value or as a vehicle for character development is beyond tired, and come on: it’s not like Martin’s books are lacking in elements of genuine shock or characters who develop complexly and interestingly without raping or being raped.

Women in Westeros and beyond operate in a misogynistic culture, as do we. Martin, as a contemporary writer drawing from and making up history, is inevitably going to draw on that. It’s ingrained in our collective unconscious at this point, it’s rape culture. Look at how the Steubenville trial played out, how Dylan Farrow’s character has been assassinated since she revealed her abusive history at the hands of Woody Allen. Furthermore, look at the acclaim an artist like Eminem receives for “cleaning out [his] closet,” while Tori Amos has largely been dismissed as Queen of the Rape Shrews because she wrote a song about her own experience with sexual violence.

I don’t think George R. R. Martin hates women. I think he recognizes that we’re just as capable as men of being despicable or heroic, violent or tender, or any combination of any number of traits. Some of his large cast of female characters throw out the gender binary altogether; others turn it on its head and create a new kind of power. Margaery uses her sexuality and status to her advantage, while Sansa uses her feminine education and the fact that she is largely overlooked or underestimated to hers. Martin respects women enough to have written an incredible number of them, no two the same, and very few mere tropes. I’ve written on this before (and do regret leaving out Lady Olenna).

But back to the scene at hand. What will its purpose be?

Since Jaime had returned to King’s Landing in the show in time for Joffrey’s wedding, Jaime had had some time with Cersei, and they’d had a rather lukewarm reunion. His experiences, culminating with the loss of his sword hand, changed him, and viewers saw that Cersei wasn’t fond of the changes; wasn’t, seemingly, even attracted to him anymore. So was the rape, then, the violent outpouring of Jaime’s grief over the loss of his identity, his lover, and his son? Maybe. That doesn’t excuse it, but it would at least mean there was a reason for it other than, “This will be more interesting/entertaining/titillating/likely to make people write about it. Plus period sex is gross. Rape is definitely better.”

If there’s no reason but the latter for it, will it be swept under the rug like Show Drogo’s rape of Daenerys? Age of consent/sold into marriage/child bride stuff aside (I KNOW), Book Drogo wants his new Khaleesi to be as nearly his equal as she can be so that his people will respect and allow themselves to be ruled by her; he doesn’t want her to be merely a submissive child bride, repeatedly and forcibly remind that’s her role. And that isn’t what she wants to be either; she wants to claim her own power, and it is Drogo’s respect and love for her that give her the confidence to do so after her terrible brother’s abuse throughout their childhood. Dany and Drogo’s relationship in the show never rang as true for me as it did in the book because Stockholm Syndrome is not the same as sun-and-stars, moon-of-my-life love.

Should Jaime and Cersei’s relationship revert back to anything resembling what it was before, it will go entirely against both of their characters. The Cersei who told Ned Stark that she needs Jaime to feel complete and the Jaime who came into the world holding on to Cersei’s heel will be entirely invalidated.

If HBO needed to show Jaime and Cersei’s relationship souring, well, the book already does that because of something Tyrion says to Jaime. Do they plan to leave that out of the show? What about when, in Cersei’s POV chapters in A Feast for Crows, she never doubts that Jaime will help her, will come back to save and protect her? Would a woman really feel that way about her rapist? I did read Martin’s response to the scene; butterfly effect indeed.

Or maybe HBO wants to remind us that rape can happen even within the context of a consenting relationship. Marital rape has, after all, only been illegal in this country for how many years?! But I don’t think their intentions were that pure.

Did HBO change the scene just to see if I would keep watching to figure out just exactly WTF? Maybe.