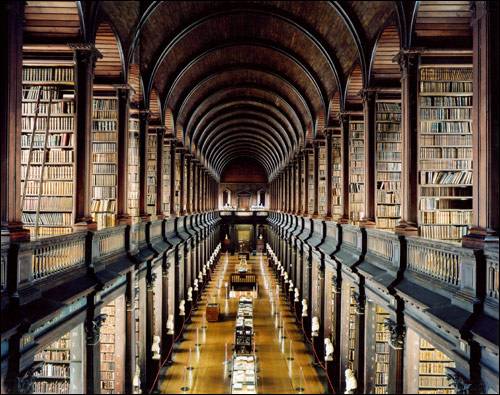 To celebrate Book Riot’s  first birthday on Monday, we’re running our best 50 posts from our first year this week. Click here for the running list. This post originally ran November 16, 2011.

This is a project for the most precocious amongst you. The ones who have read all there is to read. The ones who look upon their bookshelves and sigh. The ones who have exhausted reality and long to tumble down the rabbit hole. Not to mention the ones with oversized literary trivia glands. This is for you.

Let’s build The Library of Fictional Fiction. It is a place populated with books that only exist in works of fiction. Books within books; a hall of mirrors wrapped up as a library.  It is a place untamed by the Dewey decimal system. Its true contents utterly unknowable. It is, in the truest sense of the word, the most sublime library ever conceived.

So, let us break ground and crack open these literary Russian dolls. Here are a few great works of the fictional fiction canon to get us started:

Written by the late Laura Chase, it tells of a love affair between a wealthy young woman and a Marxist science fiction writer who leaves her to fight in the Spanish Civil War and then World War II. He entertains her with a fantastical tale of space lizards, mute temple girls, and the titular blind assassins. It is Atwood’s Inception: a story within a story within a story.

The Library of Fictional Fiction’s Female Eunuch? Field’s autobiography launches her as a feminist icon and redoubt against patriarchy. It charts her ambivalence toward sex, her ‘use’ of an invalid soldier to become pregnant, and how to untether oneself from men. A work of fictional fiction to inspire social movements and assassination attempts.

Is Man a Myth? by Unknown (The Lion, The Witch, and the Wardrobe by C.S. Lewis)

Glimpsed on the bookshelf of Mr Tumnus in Narnia but never opened, this is to be found in the religion section of our library. Written by our fictional equivalent of Richard Dawkins, it no doubt explains away the existence of man as an outdated oral tradition handed down from fawn to fawn. How can man exist, it probably concludes, with so much uneaten Turkish Delight in Narnia?

Now over to you. Which fictional books would you like to take down from these looking-glass shelves?