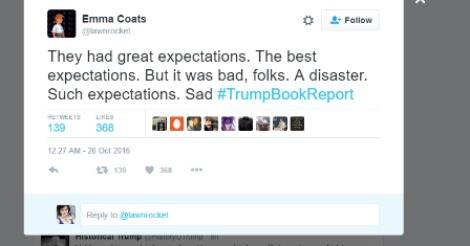 Out of the darkness that was presidential debate number three, there came a light: #TrumpBookReport. You are a treasure, book nerds of twitter.

This one seems to have been the match that lit the #TrumpBookReport bonfire:

Trump’s foreign policy answers sound like a book report from a teenager who hasn’t read the book. “Oh, the grapes! They had so much wrath!”

And a sampling of the magic that followed:

Westeros is failing. Wall is okay. I could build it higher. American steel. I’d be the best King. Tremendous king. Isis.#TrumpBookReport

I was against the war in Troy. Ask Hannity. And Helen was maybe a 6. She wouldn’t have been my first choice, believe me. #TrumpBookReport

Don Quixote was a loser, ok? He couldn’t even win against a windmill. Listen, I’ll beat all the windmills, believe me. #TrumpBookReport

Hester Prynne maybe a five. Believe me, Dimmesdale could do better. That Pearl, though. I’ll be dating her in 20 years. #trumpbookreport

We’re gonna build a bridge. Best bridge you ever seen, magnificent bridge. Then we’re gonna send the Terabithians back #TrumpBookReport

That caterpillar was doing an awful job at eating. What a loser. I eat better. I am a great eater. I’m always hungry #TrumpBookReview

20,000 Leagues Under The Sea. Huge number of leagues. Big-League leagues. Thousands of leagues, all under the sea. #trumpbookreport

Gatsby? He says he was great. I don’t know. People are saying maybe not so great. I’ll make Gatsby great again. #trumpbookreport

I just don’t get what Lennie did that was so wrong! Nice guy! Why couldn’t George just have told him about the rabbits? #TrumpBookReport

Odysseus really made whatever island it was great again. So great. And the ships and planes. I’ll never forget our military #TrumpBookReport

I don’t know about this guy Gulliver. I think we need to shut down his travels until we figure out what’s going on. #TrumpBookReport

Voldemort was a good man. A good man. People say I’m like him, that’s good. But Hermione was a nasty, nasty woman. #TrumpBookReport

I’m telling you folks, if I were in charge, we wouldn’t have waited for Godot. I would’ve found him in 5 minutes. #Trumpbookreport

Oedipus. Tremendous leader. The best. I’ve always said that if Jocasta were my mother, perhaps I’d be dating her. #TrumpBookReport

“Juliet. Such a nasty woman. She made Romeo kill himself. And believe me he could have done better. Look at her.” #TrumpBookReport

Lemme tell you about Tom Sawyer. If I painted that fence it would’ve been done once. He’s a loser. He’s a disaster, okay? #TrumpBookReport

There were flies and I was their lord. You’ve never seen such a lord, I was the best. Also fat kid died, sad. #TrumpBookReport

This code and Da Vinci made the code. I know Da Vinci and he’s a terrible guy and his code, let me tell you its a disaster. #TrumpBookReport

“We’re gonna catch so much rye, you won’t believe it. We’re bringing those rye catching jobs to America.” #TrumpBookReport @AntonioFrench

The first rule of Fight Club is I don’t have to accept the results of any fight I lose in Fight Club. #TrumpBookReport

I have so much pride. So much. I have no prejudice. #TrumpBookReport @AntonioFrench

Dumbledore?Such a disaster.He ran that school for 30 years & look at it. Now that Voldermort, you may not like him but… #TrumpBookReport

Even Margaret Atwood is a fan: