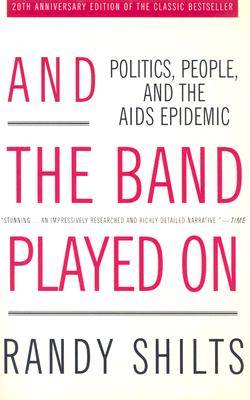 This is a guest post by our current Rioter in Residence, Kevin Smokler. Kevin is the author of the essay collection Practical Classics: 50 Reasons to Reread 50 Books you Haven’t Touched Since High School (available now from Prometheus Books) and the editor of Bookmark Now: Writing in Unreaderly Times, A San Francisco Chronicle Notable Book of 2005. His work has appeared in the LA Times, Fast Company, Paid Content, The San Francisco Chronicle, Publishers Weekly and on National Public Radio. Follow him on Twitter @weegee. 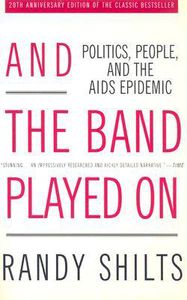 And The Band Played On by Randy Shilts, the definitive look at the first decade of the AIDS epidemic, was published in 1987. Shilts, national correspondent of the San Francisco Chronicle and the paper’s first openly gay staff member, had spent four years in research and reporting, accruing personal debt and publisher rejection. Today And the Band Played On has sold nearly a million copies, won fistfuls of awards, and was made into an HBO movie in 1993. In an assessment, historian Gary Wills wrote, “This book will be to gay liberation what The Feminine Mystique was to early feminism and Rachel Carson’s Silent Spring was to environmentalism.”

It is also the most important book of my reading life. Had I not woken up, I would have missed it entirely.

In the fall of 1993, I was twenty years old, a junior in college, hacking my way through a particularly cold autumn in Baltimore. I had declared my major “Writing Seminars,” which is just “creative writing” said with pretension. Reading was an activity assigned by professors, and reading for fun I had given up nearly 6 years before. I had loved books my entire life, but arriving at a hyper-competitive high school and being a hyper-ordinary teenage boy, I was more interested in my friends and girls and looping around town in a used Volvo I had inherited along with a learner’s permit.

I also was angry that, thanks to the educators who looked out for me, books had gone from something fun to something assigned, dissected, and term-papered upon. I was mad at them for it and, by extension, mad at books. I was an idiot and a brat.

In that cold autumn of 1993, my roommates were busily looking at medical school catalogs and preparing a confident march into the next phase of their lives. I had no idea what mine would be. Terrified of the end of school only eighteen months away, I had no time for any book or anything else that didn’t hold the answer to my future. I was lonely, confused, and scared.

Category ID: 13193
Category ID: 479
Category ID: 867
True Story Newsletter
Sign up for True Story to receive nonfiction news, new releases, and must-read forthcoming titles.
Thank you for signing up! Keep an eye on your inbox.
By signing up you agree to our terms of use

I had grown up with AIDS on the nightly news. Rock Hudson had already died from the disease, as had Queen lead singer Freddie Mercury, a personal hero. Rudolph Nureyev and Arthur Ashe had perished from it earlier that year. The HBO movie of And the Band Played On had just been released. I had not seen or heard of it.

In early November, shortly after midterm exams, a friend loaned me the book. I do not remember why. In fact I remember little other than her saying, “You must read this” and “it’s easy. The chapters are short,” which was true. When I gave the usual arguments—too busy, lack of interest, mystification at reading being pleasure and not punishment–she looked at me and asked something no one had before or has since.

“I’m asking you to read this, to make time. This book is that important to me.”

What she was really saying was, “If we are as good of friends as we say we are, read this. You will understand who I really am.”

I set down the huge, intimidating book next to my bed, about the size and thickness of a TV dinner, and did as I was asked. I read one chapter, two to five pages, each night. Sometimes only a paragraph before the excuses came.  Finishing took the remainder of the school year and the first few weeks of summer.

I did not fail out of school, nor did I miss out on anything I thought I should be doing instead. The book did not hold the answer to my future, but when I finished, through the anger, the shock, and the sorrow, what I said, out loud to the same empty room where my friend had first handed me the book, was this.

“This is what I’ve been missing.”

I have not stopped reading since.

I owe And the Band Played On and Randy Shilts my whole adult life. This book has played some part in why I became a writer, why I live in San Francisco, why I value the written word the way that I do. More than that, it reminds me that we live our lives amongst others, and we may share nothing with them but our common makeup as a species. I was not an AIDS sufferer and didn’t know any AIDS sufferers. I was too young to understand the extent of the injustice being perpetrated against those who had the disease in the time period Randy Shilts covered. I found out about the displaying of the AIDS Quilt on the Mall in Washington in 1996 the day after it happened.

Still, I reread And The Band Played On every few years. I’ve given every important person in my life a copy. It is the only answer I have for my most important book. And were it up to me, every high school student would be given a copy too, so they can witness its power and that of books without the same ignorance and resentment of them I had. And each year, I leave a copy of it at the AIDS Memorial Grove in San Francisco in honor of Randy Shilts, who perished from the disease in 1994.

We are all busy people who must make time to read. It is worth asking why we would spend our time reading 650 pages on a disease three decades old that still kills hundreds of thousands of people a year, but who are now mostly poor, brown, and far away, people we will never know. My best answer: I believe that great literature (and music, and film, and theater) is exhilarating no matter how sad its subject. It reminds us of the bottomlessness of human creativity and passion, of what we can accomplish, of how rich our stories are, of genius like Randy Shilts’, and of how great books can free us from our own sillier, smaller selves.

Like a thaw after a long winter, great books remind us of what it means to be alive.  Every time I reread And the Band Played On, even all these years later, I need that reminding more.