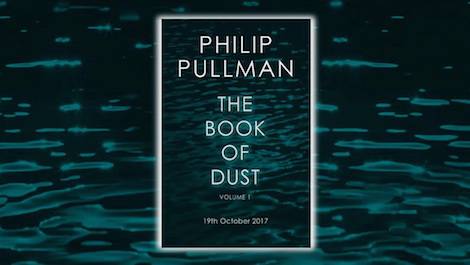 This post contains spoilers for the just-released excerpt from Philip Pullman’s The Book of Dust. Be cautious!

When I was ten years old, an excerpt from Northern Lights was featured in a curriculum textbook. I was intrigued, and my class teacher told me that the book was right there in the school library if I wanted to read it. Read it? Pfft. I devoured it.

I was a vociferous reader. My parents never gave out to me when I came to the dinner table with a book in my hand; they allowed me to spill food down my front while I kept my eyes on the pages, which seems daft but in retrospect really did foster my love of books. I’m not great with a fork, but I can read in almost any situation.

I read the entirety of His Dark Materials with the books hidden under my desk in school. This was my ultimate rebel moment, by the way: I sat through three weeks of lessons when I was ten without hearing a single word… all so I could read something I liked better than whatever they were trying to teach me.

I’ve been waiting for The Book of Dust since I first learned of it in 2005. I’ve only been around since 1990, so I’ve been waiting half my life by now. So you can imagine my absolute delight when I went online this morning and had a chance to read Pullman’s first excerpt from La Belle Sauvage, the first book in the trilogy that will make up The Book of Dust.

The extract focuses on 11 year old Malcolm Polstead, who lives on the banks of the Thames in Oxford, and his encounter with a well known character in the dead of night, some ten years before the events of Northern Lights. Malcolm, like Lyra and Will who have come before him (after him, technically), is ostensibly normal, with nothing splendid to show in this excerpt beyond his intuition.

Everything was going fine until I got to “My name is Asriel”, and my heart thundered to life in my chest. I’ve waited 13 years to read this and here he is, proud and in control as always. He’s back.

His Dark Materials was the first series of books I read where the characters were textured and complex- not automatically heroes, nor villains. As a child I didn’t understand Marissa and Asriel, but as an adult, I know that love is hard, people are complicated and sometimes, ambition and pain cause us all to pick the wrong paths. Will Parry was the first literary male I ever fell in love with- his fierce bravery and stubborn fighting spirit seemed indomitable. And where to even begin with Lyra? Other children in my class wanted to go to Hogwarts- and so did I, but I wanted a daemon more. I wanted to share in Lyra’s reckless courage.

It was also the first series I read that introduced me to the concept of religion in society. I grew up in Catholic Ireland; divorce, suicide and marital rapes weren’t crimes until the mid 1990s. The deep criticism of religion in general was a huge concept for a ten year old to comprehend- but a ten year old Catholic girl? It blew my mind. It’s not an exaggeration to say that this particular series of books changed my life. I finished them and I felt like I had finally woken up to something huge.

You can see why The Book of Dust is important to me. You can understand why my heart was all quivery while I read the excerpt. Pullman’s literary gift is still sharp as ever; I read twenty words and the whole environment swarmed around me as though I’d never left. These bare few paragraphs felt like coming home. I cannot wait to know more about Malcolm- and more about the Dust that gives the series its overarching reference.

I had no idea when I was ten years old, but I know now that Philip Pullman used fantasy to inspire critical thinking. It was possibly the greatest literary gift I have ever received- except for when my parents let me read at the table.