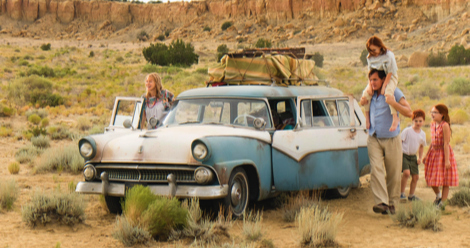 Many readers have been eagerly awaiting the adaptation of the Scribner memoir of the childhood of Jeannette Walls titled The Glass Castle. Spending an impressive 261 weeks on The New York Times Best Seller list, the tale of the Walls’ family was clearly ripe for the Hollywood treatment.

Lionsgate acquired the rights to this touching and heartbreaking story in 2012. Originally, Jennifer Lawrence was said to be in talks to play the adult version of Jeanette, but she dropped out of the film after some issues with finding a male lead. Marti Noxon’s original script was rewritten in 2015 by Andrew Lanham and Brie Larson was cast as Lawrence’s replacement. Since then, Woody Harrelson has been identified as Rex Walls with Naomi Watts joining the cast as his wife, Rose. Destin Daniel Cretton is directing.

After much anticipation and some changes to cast and crew, we now have a trailer! The film adaptation of The Glass Castle by Jeannette Walls is scheduled to be released in theaters on August 11, 2017.