I’ve never been much of a book club person. By which I mean I’ve never been in anything most people would call a book club. I feel like I have, though, because my mom used to be part of one. I would sometimes read the selections she brought home. She and I would talk about the books before or after her club meetings. Just us, in our own spontaneous two-person book club.

When I think about why I haven’t ever joined an actual book club myself, I can come up with all kinds of reasons. I have social anxiety. I don’t like debate, or feeling obligated to entertain the opinions of people I don’t know well. Books are personal for me, and sometimes I don’t like to discuss them at all. All of these things are true, and yet, I don’t have a particularly negative opinion of book clubs. They seem like an inherently good idea. If nothing else, they’re a way for introverts to socialize. I may want to join one someday, maybe even soon.

The real reason I’ve never been in a traditional book club, I believe, is that I liked the two-person club I had with my mom. I was completely happy with that situation. Looking back, I think it may have turned me on to the idea of reading books with just one other person at a time. Here are what I’ve found to be some of the joys and benefits of naturally occurring two-person book clubs.

Spontaneous Two-Person Book Club Benefit #1: You Don’t Have to Plan

The reading I did with my mom wasn’t planned. I wouldn’t always read the books she was reading. In fact, I don’t even remember how often we read full books together. It might have only happened a few times.

What I do remember is that I was frequently aware of what her book of the month was. I would see it lying on the beat-up den couch, on the kitchen counter, on the glass coffee table in our living room. I remember a Scottish murder mystery, a literary romance, Toni Morrison’s Paradise. My memory is a bit blurred between the local book club my mom attended and Oprah’s book club, which she also followed from its start. In any case, I’m pretty sure that she was always participating in at least one book club throughout my teenage years. 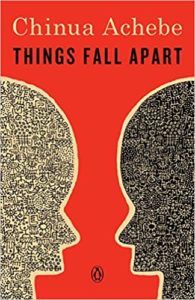 I would ask her questions about the book she was reading, and sometimes begin it myself. I remember reading Things Fall Apart aloud in the car when I was in high school. My mom had picked me up from cross-country practice and we were going to pick up my brother at a friend’s house. She had started the book herself earlier. As she drove, she began telling me about Okonkwo’s problems with his children and wives, and we decided to read more of the story to pass the time, stopping along the way to discuss parts of it.

In more recent years, a friend of mine and I realized that we were regularly reading the same books and discussing them. It happened naturally. One of us would read something and mention how excited we were about it. The other would then immediately want to read it, and we would end up talking about it, sometimes late into the night.

The reason two-person book clubs aren’t really a known thing is that they don’t have to be. They often just happen on their own. They emerge naturally as part of a relationship between two people who like to read.

Since we realized we had a two-person book club, my friend and I have sometimes tried to sync our reading. It doesn’t always work. But that’s okay, because we don’t have the same expectations that we might from a more official commitment. If one of us gets bored with a book or just isn’t in the mood to finish it, that’s fine.

While we both like discussing books with the other, neither of us minds reading alone. So often we just spout off lists of what we’re reading or thinking about reading and see what happens. At times, we’ve even discovered that we’re already reading the same thing, or reading related books. About a week ago, she mentioned to me that she was reading Ottessa Moshfegh’s Eileen. I hadn’t read Eileen but had read Moshfegh’s My Year of Rest and Relaxation several months previous, and forgotten to tell her. We fell into an exchange about how we both like weird fiction that feels purposeful, which is something both of us glimpsed in Moshfegh’s work.

Spontaneous Two-Person Book Club Benefit #3: It Can Enhance Your Relationship With the Other Person

For a while, my boyfriend and I developed a habit of reading books together. He would notice me reading a book, pick it up when I was done with it, and start reading it during his breaks at work. He’s often claimed that he isn’t as big of a reader as me. While it’s true that he doesn’t read as much as I do, he reads thoughtfully and loves analyzing stories.

Trading thoughts and observations with him about books has helped me enjoy the books more, but it’s also helped me enjoy my time with him more. These days, we more often use movies and TV for conversational fodder. But we still occasionally talk about books, and our book conversations have stayed with me. They’ve informed conversations we have about other subjects—everything from current events to serious life decisions. As a bonus, they’ve also helped me become a better creative and critical writer.

My book club friend and I partially grew our friendship out of books. We started talking about literature and film early on, when we barely knew each other. We discovered the author Patricia Highsmith together when chatting online one night. Days later, I managed to get hold of a copy of A Dog’s Ransom at a used bookstore. She found her own copy a bit later, and our two-person book club was founded. Since then, reading is a part of our friendship. Discussing books has been a direct route to knowing each other better.

Spontaneous Two-Person Book Club Benefit #4: You Can Be More Unfiltered…Probably

I’m not suggesting that I’m not being honest when I write a book review, or express an opinion about a book in a post or article. But a pure, impulsive reaction to a piece of writing is honesty that hasn’t been examined yet. It’s something that I wouldn’t necessarily want to have out there for the world to see, or even for a room full of benign acquaintances to see. But there are people who I can test my reactions out on, people who are willing to guess at what I mean even if I phrase it badly. Probably everyone needs someone like this in their life, and having a book club with them is just one way to nurture a trusting and mentally fertile environment.

None of the above is to say that a two-person book club can’t be planned from the beginning, just that in my experience, they don’t have to be. Either way, one-on-one book clubs have their own unique value. No matter how they come about, they serve special purposes that a “regular” book club can’t.