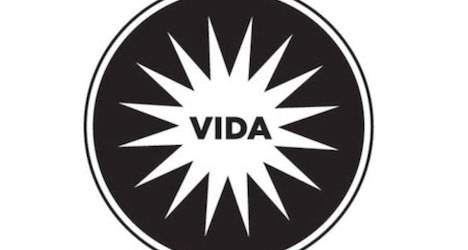 Have a few extra dollars floating around? Want to send them to bookish people doing important work? You might consider sending them to VIDA, an organization that supports women in the literary world. They are trying to raise $20,000 to support their annual VIDA count. This is a yearly event where the organization’s all-volunteer staff literally counts how well women are represented in the top-tier literary publications (think The New York Review of Books, Harper’s, The New Yorker, etc.), both in terms of how many books written by women were reviewed in these places and how many women wrote reviews there. Last year they expanded their counting to include books authored by and reviews written by women of color as well.

Check out the numbers from previous years if you would like to feel sad for a while. The representation of women generally is not good. And the representation of women of color is really, really not good. The news isn’t all bad — some publications are improving — but generally speaking they are not reviewing books by women or publishing reviews by women at the rate one would expect, given that women make up more than half the population. The overall numbers from Harper’s, for example, are 144 articles by or about books by men and 69 articles by or about books by women. This is an improvement on past years. The Nation’s numbers from 2014 are 469 male, 193 female. Of the women who do get published at the top-tier places, women of color are vastly underrepresented: The Atlantic, for example, published 21 articles by or about white women writers and only four articles by or about women writers of color. These numbers are typical.

It’s frustrating to see only small improvements in the VIDA count numbers year after year, but there are improvements, and I’m convinced that VIDA has had a large and entirely positive influence on literary culture. It’s impossible from the outside to say whether those publications whose VIDA count numbers have improved have made that improvement because the count motivated them. But certainly conversations in the literary world have been different since VIDA started its counting six years ago. People care about this count. It makes a splash when it comes out in the spring. I hear of readers cancelling subscriptions specifically because of bad VIDA count numbers. I personally went from someone who didn’t much notice whether the books reviewed or the reviews themselves were written by men or women, to someone who scans the table of contents to see how many women are included. It’s impossible to know whether my experience is common or representative, but I’d bet you it is.

The VIDA count is not perfect. It covers only a small percentage of book publications out there. It has only begun to consider the representation of women of color. And counting only goes so far and can tell us only so much. It doesn’t address why women aren’t well represented or how to change that. But there’s nothing like cold, hard numbers to make a powerful point. Any woman who has someone say to her that things aren’t so bad or that “publishing is run by women, don’t you know that? What are you complaining about?” has evidence on her side.

VIDA also publishes writing by women and plans to offer scholarships to help women writers succeed in their careers. This year they will be counting for gender, sexuality, and disability as well. This is work I, for one, want to get behind.