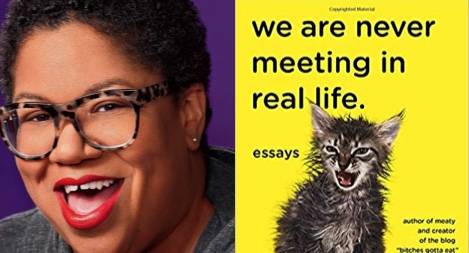 There are a number of reasons I love Samantha Irby. She makes me feel better about the fact that I hate almost everything (most especially leaving the house), she talks frankly about the realities of living with a bowel disorder, and she recently got BORN DEAD tattooed on her knuckles. She is my hero. So I jumped at the chance to ask her some questions about her best-selling new book, We Are Never Meeting in Real Life.

KM: You’re kind of blowing up right now. You’re a New York Times best-selling author, were voted Most Inappropriate by New York Magazine…all the things a young writer dreams of. You’re also an outspoken homebody. Do you get invited to a bunch of fancy parties now? Does that make it harder to live the hermit life?

SI: You know what, I’ve been invited to a handful of interesting things, but I’m not special enough yet to be offered free transportation so I don’t go to a goddamn thing. I hate going places because the outside world is unpredictable, so I try not to go anywhere. The cat voted me Most Important Person in This Living Room and that’s enough for me.

KM: You can have five people (dead or alive) at a dinner party. Who do you invite?

KM: I appreciate how willing you are to talk explicitly about poop and what it’s like having a colon disorder. As someone who has a similar affliction, I think it’s so important that people stop being afraid to talk about bodily functions. Because all it does is make people with janky digestive systems feel bad about pooping. Do you feel like it’s important to be open about poop and butts? Or is it just a part of your life and I’m projecting my lofty ideas about poop on you?

SI: IT’S SUPER IMPORTANT TO ME. Everybody Poops yet it’s still so weirdly taboo to talk about, especially for women. It is my dream that one day we’ll all be able to excuse ourselves from a conversation by saying “Excuse me, I have to poop” and then walk away unashamed. I have friends who have literally shit their pants before yet feel weird about leaving the table in the middle of dinner to go take a #2. And I get why, it stinks and it sounds gross, but I still hate it. I had to get comfortable talking about it because I was actually shitting ALL THE TIME and going to the hospital for various poop-related maladies, and there was no adorable, ladylike explanation for my many extended trips to the toilet. So I just started being open and honest about it to make life easier for myself. And in the process, it’s opened up the conversation for other people. I’m not saying that my stupid book has revolutionized people’s relationships with their buttholes, but I do get emails all the time from women who are like “THANK YOU FOR TALKING ABOUT DIARRHEA ALL THE TIME” and that’s really rewarding. If writing about colonoscopies helps put a smile on the face of someone dealing with IBD then it’s totally worth it.

KM: Did your editor balk at anything poop-related? Or get squeamish about anything?

SI: NOT AT ALL. But I’m not an idiot, my pitch packet had the big diarrhea story of this collection in it. Also, I think she might have read the first book? Or was at least familiar with it? I’m not a hundred percent sure what kind of vetting Vintage did before they bought this book but I’m guessing they at least skimmed my blog, and even a cursory glance will reveal that I absolutely love talking about butts. Andrea, my editor, didn’t blink an eye at any of it. The more disgusting, the better.

KM: What are 5 books you think everyone should read?

KM: What was the weirdest part of the editing process for We Are Never Meeting In Real Life?

SI: My first book didn’t have a copy editor. And that was fine because it was 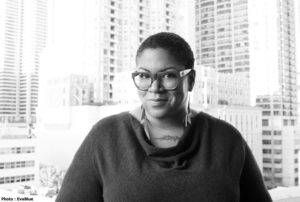 an indie press with a shoestring budget and the whole thing felt very cool and DIY when we were putting the book together. But this time around I had an editor and a copy editor and a marketing team and lawyers had to look over it, and that was the most excruciating process I’ve ever been through. Not because they were wrong, but because I’d never had anyone take a fine toothed comb to my work. I’ve never had to explain who Omarion is or why I reference him so frequently in my work before, and I’m the type of person whose knee-jerk reaction to a question or correction is “Oh my god, am I stupid?” Over and over again, I’d read the notes the editors sent back and would fold in on myself in shame, especially since the minute you have to explain a dumb joke it leeches all the humor out of it? And I would find myself wondering if the things I’d written were actually funny after having deconstructed them. I’m generally a pretty self-conscious person, so even though it was kind of mortifying I’m glad I had to do it because the idea of embarrassing myself in front of a national audience makes me want to die.

KM: I’m pretty f’ing excited about the pilot of Meaty [based on Irby’s first book]! What can you tell us about it?

SI: This is gonna be such a disappointing answer. I don’t understand Hollywood and it doesn’t even feel like I’m working on a real television script because I’m doing it at my little desk that’s shoved in a corner of the living room. Rural Michigan is the literal opposite of Southern California. Okay, so Jessi Klein and I wrote the first draft of a pilot, which was terrifying and awesome and I think turned out pretty hilarious, then we sent it to the nice people at FX for feedback. Which we got! And the feedback was positive! So now we’re working on a second draft, which we’ll turn in for more feedback, then maybe they’ll let us make a pilot. I’m scared of looking like a fraud so I don’t ask anyone too many questions for fear that they’ll turn around like LOL YOU WRITE A BLOG THIS WHOLE THING IS CANCELLED.

KM: True/False: Your next book is going to just be your investigative reporting about your friends’ shower habits?

SI: It’s true that I am super interested in why so many people don’t use washcloths, but if I had to do any actual investigation (collection of data, comparison of findings, etc.) I’d be bored with it within a day. There’s a reason I only write about myself and whatever I happen to be watching on television: I am neither dedicated nor smart. Sometimes I’ll be sitting in front of the TV with the iPad in one hand, my phone in the other, and a novel in my lap and wonder how on earth I even made it through high school. If I had to write so much as a book report right now, I’d go into hiding.

KM: I feel like when people write with a strong, funny, fairly informal voice, people assume that actual work doesn’t go into the process. The way people think comedians just walk on stage and improvise a new, full set of jokes every night. Has that been your experience?

SI: Kind of? It’s mostly, like, “Hey I have a diary too how can I get someone to pay me a million dollars for it?” Which is a question I would also like answered. It’s true that I didn’t go to school to learn how to do this, and I don’t need to people to sit back in awe like writing about farts is a preternatural gift handed to me from on high, but just a little acknowledgment that I don’t just string a bunch of texts to my friends together to make an essay would be cool. Although maybe I should actually try that. I’m a hilarious texter.

KM: In We Are Never Meeting IRL, you mention someone having an “ass like a library book.” What…exactly does that look like?