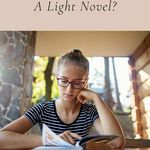 If you follow the manga scene long enough, you’ll run into mentions of light novels sooner or later. If you’re an anime fan who checks out new shows every season, you’ve probably watched at least one series originally based on a light novel. But if you’re new to manga and anime, you might be wondering: what is a light novel exactly?

What Is a Light Novel?

Light novels are short, fast-paced novels that are manga-adjacent. Many use tropes familiar to avid manga readers. The slapstick comedy, the over-the-top violence, the over-exaggerated reactions — you can find all these things in light novels. The only difference is that it’s prose versus a comic. As a result, many manga fans read light novels and most light novel fans read manga. The audiences overlap, and you’ll notice that North American manga publishers release light novels alongside their manga licenses regularly.

The audience overlap isn’t accidental. You’ll find manga-style illustrations in many light novels. Don’t expect panels like you’d find in a manga, though. These drawings are meant to provide visual representations of the characters, and perhaps depict key moments in the book.

Sometimes light novels are compared to YA novels and that’s not entirely wrong. The characters and plot lines of series would appeal to a teen reader. Likewise, streamlined prose will also suit readers who, for whatever reason, don’t want the more descriptive prose and complicated narratives often found in literary fare.

But comparing light novels to YA novels isn’t entirely accurate either. It’s like saying all manga is for teens. We know that’s not true. A better way to think of light novels is to think of them as a type of pulp novel. The aim is to entertain and provide an escape from reality, not create a peerless work of literature.

Some Traits of Light Novels

In general, light novels read faster than your typical novel. The shorter lengths combined with fast-paced narratives mean that you can finish a volume in a couple hours. It’s ideal if you don’t have a lot of free time but still want to read a book. Or, if you find yourself struggling to focus for whatever reason (like, say, a pandemic), you might find light novels easier to read when your mind is filled with so many competing thoughts and concerns. In many ways, that situation is exactly what light novels are made for.

Some light novels begin as online serials self-published on blogs or forums. Publishers often pick up these titles, help the author revise them, and then release them as light novels. An artifact of these online origins are the titles. You might notice some light novels feature long, descriptive titles that read like plot descriptions. How the Realist Hero Rebuilt the Kingdom. My Daughter Left the Nest and Returned an S-Rank Adventurer. Arifureta: From Commonplace to World’s Strongest. They sound like quick plot summaries, don’t they? There’s a good explanation for this. Webnovel platforms feature countless titles competing for readers’ attention. How do you hook readers who might never click on a title to read a plot summary? You write descriptive titles like this.

North American manga publishers have released light novels ever since the first manga boom of the 2000s. But they struggled to find a place in the market until 2014, when Yen Press launched Yen On, an imprint devoted entirely to light novels. Years of watching light novels flounder in the North American marketplace led to some skepticism about this new venture. Yen On’s initial plan involved publishing 24 light novels a year and sounded so ambitious.

Today, easily more than 24 light novels are published a month. Other manga publishers have followed Yen Press’s example and launched their own light novel imprints, as in the case of Seven Seas Entertainment and their Airship imprint. We even have publishers devoted solely to localizing light novels in English!

Yen Press announced that they’d licensed Baccano the year after launching Yen On. For fans of a certain age, the Baccano anime is that series. The fact that a manga publisher planned to localize the source material was huge and exciting. The plot can be a bit tricky to summarize succinctly. Let’s just say it involves mobsters, thieves, assassins, alchemists, and an elixir that grants immortality.

Sword Art Online introduced many fans to the isekai genre. What’s isekai? It’s when a protagonist transmigrates to another world. Sometimes they literally transport to another world. Other times, they transport into a video game. Maybe they end up in their favorite novel! Sword Art Online belongs to the video game category. It follows Kazuto Kirigaya — more commonly known as Kirito — who gets trapped in a virtual reality MMORPG. As the series progresses, Kirito and his friends navigate through other virtual reality worlds and games. Sword Art Online is a polarizing series, namely for the way it treats its female characters, but when we discuss light novels, we can’t overlook it. The popularity of isekai began here.

So I’m a Spider, So What? by Okina Baba

In most isekai series, the protagonist transmigrates to another world and reincarnates as a human. Sometimes, however, they don’t. Here, a magical battle goes awry and accidentally kills an entire class of Japanese high school students on Earth. Luckily, the entire class reincarnates in another world, with some of them even becoming nobility and royalty. Our heroine isn’t so lucky. She reincarnates as a spider in a dungeon full of deadly monsters and now must fight to survive.

Let’s take a break from the isekai and look at a contemporary series. Ryuji is a kind-hearted high school student with an intimidating outward appearance. Taiga is his diminutive classmate with a fierce personality. Ryuji has a crush on Taiga’s best friend. Taiga has a crush on Ryuji’s best friend. When they find out about each other’s crushes, they decide to help each other win over their respective objects of affection. But things don’t always go according to plan, do they?

My Next Life as a Villainess by Satoru Yamaguchi

A relatively new trend among isekai novels is the villainess trope. My Next Life as a Villainess kicked off this trend. Catarina, the heroine, was originally a high school student. After getting hit by a car, she reincarnates as a character in a dating sim. Alas, she isn’t the heroine. Catarina is the game’s villainess. Having played the game extensively, she knows that the villainess always meets a bad end, no matter the story route taken. Wanting to avoid all of that, she does things to avert those endings. However, her actions begin to change the original story.

Book Girl is a little different from other light novels on this list. It’s about a high school student named Konoha who joins the literature club. There, he meets an upperclassman named Tohko. Tohko loves stories. As in she loves to eat stories. You see, Tohko isn’t a human at all. She’s a demon who feeds on stories. What’s interesting about this series is that it takes the book theme to heart. Many of the plot lines are structured or inspired by existing works of literature. Definitely worth a look if you want something different from the average light novel.

In this science fiction series, an ongoing war between the Republic and the Empire is waged by machines. Or, rather, that’s what the Republic wants its citizens to believe. The juggernauts that populate its army aren’t controlled remotely. They’re piloted by actual humans. Unfortunately, these humans are an oppressed class of people in the Republic known as the 86. At the start of the series, a noblewoman has taken over as the handler of an infamous squadron of 86. Together with the squadron’s leader, she discovers the dark secret behind the war.

When someone asks me the question, “What is a light novel?” and asks for general recommendations, I always include a title by NISIOISIN. He’s easily the most famous light novel author, and Bakemonogatari is one of the most famous light novels ever. The series focuses on Koyomi Araragi, a high school student who survives a vampire attack during spring break. But he now can’t seem to stop encountering girls plagued by supernatural phenomenon.

Hopefully, this served as a helpful introduction and answers the question of “What is a light novel?” If you’re interested in picking one up, never fear. You can find them in print or digital, just like a regular novel. You can even read them on digital apps like Bookwalker. What’s even cooler is that publishers are working to make light novels accessible to everyone — including the launch of an audiobook program! Who knows what the future will bring?