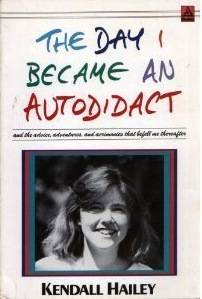 Now that I’ve tracked down Kendall Hailey, author of the terrific memoir The Day I Became an Autodidact, she gamely answers questions about her life in the twenty-plus years since her book’s publication. If you’ve ever fantasized about talking to a favorite author who’s been off the grid for a while, this proves it can be a great experience. Click here for Part 1 of our interview.

JP: Your latest project is co-writing a memoir with your mother [novelist Elizabeth Forsythe Hailey]. What has the writing process been like?

KH: Here is a little look into our writing process. At this moment we are in the midst of one of our twice-weekly, two-and-a-half-hour writing sessions. My mother is napping while I am writing this answer! I would say my mother and I have spent roughly thirty percent of our overall writing time napping, but this has led to a smooth and rested collaboration. We began writing our book right before I got pregnant (napping is a long process!) and we are now doing a final rewrite before it gets sent out into the big, scary world.

The book began when Mom asked me if, for her seventieth birthday, I would help her go through every drawer, shelf, and closet in her house. As I love to sort and organize (though, needless to say, my own home shows very little evidence of this), I jumped at the chance and I also began to think there might be a book in there somewhere. A few weeks before, my mother and I had seen a friend’s play together and had spent intermission rewriting the first act. It was such fun that it made me really want to do something together.

We began sitting in my house for a few hours three times a week, each writing little pieces, which we would then read aloud to each other. Mom immediately verged off into deeper territory and the book has become not just about what you give away, but what gets taken away, how you respond to life’s losses as well as its gifts.

It’s a joint memoir, both our voices distinct, tracing almost twenty years, bookended by the loss of the two Olivers—my father Oliver’s death in 1993 and my son’s, Charlie’s twin, in 2009. I know it sounds pretty damn depressing, but it is actually awfully funny, too—like crazy old life itself. Whether it ever sees the light of day, I have to say working on it with my mom has been one of the greatest joys of my life. We have become best friends in the process.

JP: As a mother now, have your thoughts on formal education changed or developed in particular ways? Have you been interested in the surge of support for homeschooling, for instance?

KH: I must admit I am stunned that my little angel is actually going to preschool two afternoons a week. Let me clarify that it is the sweetest school in the world, run by a dear friend of mine, where the two teachers run over and hug and kiss him when he arrives. He LOVES it. And I am amazed by how much his little brain can hold—the other night he reached out and stroked my hair and said, “Do you have hair? Are you a mammal?”

As long as he is in a school where he loves to learn, then that’s fine by me. In fact, a tad ironically for this autodidact, I am part of a group of moms working to open a charter elementary school in West Adams [Los Angeles] next year. I have more mom friends than I ever had childhood friends, and I am so deeply delighted to be able to give Charlie such a great social circle. He loves his little buddies and one of the reasons I am fighting so hard for this school is to be able to keep them all together.

However, that said, if he gets into higher grades and he’s not happy and not loving to learn any more, I would homeschool him in a minute! I am thrilled at the growth in homeschooling. (And I have to give a reading recommendation. My friend and former classmate Quinn Cummings has just written her second hysterical memoir, this one about homeschooling her daughter, called The Year of Learning Dangerously.) I’m in awe of the parents who do it and I think it’s going to create a pretty amazing generation.

In fact, my stepdaughter Leah left high school after the ninth grade and has spent the last two years working in the theater and traveling. I see so much of myself and my own struggles in her—starting with the fact she was attending my old high school. She was a straight-A student who worked herself silly, and also made time for an actual social life (unlike her stepmother). She has used these years to get so much more life experience than I had the courage to do, but she has still faced many of the same issues of loneliness and isolation that I did.

She’s now thinking about colleges and is going to apply. Having navigated this time all by herself, she really wants to be part of a community again. I think she is going to love it and value it so much more than she would have otherwise. I wish I could have helped her over the rough parts more, but I know that is every parent’s eternal wish.

I guess the unsettling conclusion is that I have mellowed. I’m all for formal education when it works, but I’m still for hitting the road when it doesn’t!

JP: And finally, I have to ask: What happened with Matthew? [The first love Kendall describes in the memoir.] Are you still friends or in touch? Was he swayed into an autodidact realm too?

KH: Though Matthew and I are not married I still adore him, and his mother, Leona, is Charlie’s Official Jewish Grandmother, his bubbe! Matthew is a great success in the world despite not being married to me. He has worked at Vanity Fair, with the byline Matt Tyrnauer, since practically right out of college, editing (he was the editor of his childhood idol Gore Vidal) and writing brilliant features. Recently, he directed his first movie, Valentino: The Last Emperor, which was hugely popular and widely praised. It was so moving and funny, and amazing to see what he got on film. Despite his insanely glamorous life, he is still the same old Matthew, which makes sense as he was a jaded, witty man of the world at twelve!