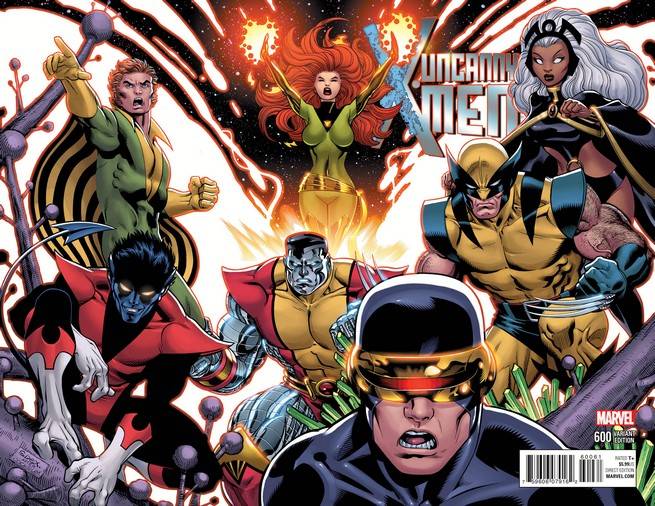 Uncanny X-Men #600 by Brian Michael Bendis, Chris Bachalo and many, many more (Marvel Comics)
I’ve always been an X-Men fan first and a Marvel fan second. I came to comics largely due to the 90s X-Men cartoon, and for a long time X-Men comics were the only comics I really read. One of the first comics I remember reading – and still own – is Uncanny X-Men #300. I got back into comics just in time to pick up Uncanny #400 as it came out, so X-Men anniversary issues tend to mean a lot to me. Bendis’ run on both All-New and Uncanny have been really great, so his final issue with these characters will definitely be something of a barnburner – even if there are still quite a few plots to resolve. There’s a great line-up of artists for the book, too, which means it should be a gorgeous tribute to the X-Men past, present and future.


I’ll admit, Grant Morrison’s name on a book pretty much makes it an easy sell for me. But the idea of Morrison reinterpreting the mythic origins of Santa Claus seems like a great way to spend the holidays. Focusing less on the Christian Saint and more on the Nordic roots of the character, we’re set to a see a rough-and-tumble Viking Santa Klaus. I’ll be curious to see how ideas like shamanism, Norse mythology and possibly even reindeer herding are worked into the story of Santa. What I’ve seen of Dan Mora’s pencils on Hexed gives me the impression this book will look fantastic.


Category ID: 1074
The Stack Newsletter
Sign up to The Stack to receive Book Riot Comic's best posts, picked for you.
Thank you for signing up! Keep an eye on your inbox.
By signing up you agree to our terms of use
I really enjoyed the first issue of Doctor Strange and this second issue promises to deliver some more mystery and mysticism. A tour of Doctor Strange’s magical home – the Sanctum Sanctorum – is on the agenda and I can’t wait to see how Chris Bachalo visualizes the weirdness of that space. I’ll be curious to see how Aaron continues to play with the theme of magical creatures as bacteria and just how cavalier his Strange really is.

Survivors’ Club #2 by Lauren Beukes, David Halvorson & Ryan Kelly (Vertigo/DC Comics)
I’m not generally a horror fan, but I do really like stories that play with the conventions of horror stories. Survivors’ Club follows a group of people who have each survived what basically amounts to an 80s horror film and have found themselves drawn together via a strange online list. While I wish the first issue had gone a little bit more in depth, I found myself wanting to know what happened to the group as soon as I put the issue down.

Drax #1 by CM Punk, Cullen Bunn & Scott Hepburn (Marvel Comics)
I never really cared for Drax as a character until the Guardians of the Galaxy film. Dave Bautista – a semi-retired WWE star – breathed life into the character in a way that made me take to the character in just a few minutes. So it’s a bit ironic that former WWE superstar/soon to be UFC fighter CM Punk’s first major comic will be a Drax book. I really got a kick out of Punk’s short story in Thor Annual earlier this year, even if it wasn’t quite the story I was expecting. It seems that Punk is being paired with veteran writer Cullen Bunn, which is a solid choice to balance out Punk’s punchy prose. Poised to bring us an action oriented take on the character, I’m interested to see how Punk fares in the four-page arena.


DC’s collected edition department has really been stepping up their game in finally getting around to collecting/reprinting a lot of the great Batman and Bat-family titles from the late 90s and early 00s. Many of those books come from the pen of Chuck Dixon, perhaps one of the best Batman writers who is more well known for writing characters other than Batman. This edition collects the early mini-series and one-shots, which first brought Black Canary and Oracle – Barbara Gordon – together to form the Birds of Prey. I’ve never actually read these issues, so getting insight into the creation of one of the best team books in comics is going to be interesting, especially knowing how the team develops over time.

James Bond #1 by Warren Ellis & Jason Masters (Dynamite Entertainment) / Doctor Who: The Eighth Doctor #1 by George Mann & Emma Vieceli (Titan Comics)
I’m going to be writing about both these books later this week, but I thought it worth mentioning that my two favorite British Icons, James Bond and the Eighth Doctor, will be making a big, splashy return to the comics world on the same day. Both books look fantastic and I can’t wait to see how both characters are handled.