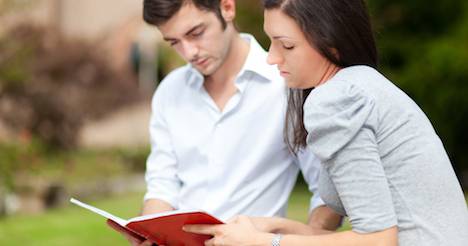 This is a guest post from Jessica Yang. Jessica grew up in Silicon Valley, yet somehow ended up rather inept at technology. She dreams of reading luxurious novels all day in a greenhouse, and is guilty of writing puns for money. Majoring in Japanese and English literature made her both wary and weary of the Western canon. She can be bribed with milk tea. Follow her on Twitter @aprication.

People come to me for book recommendations. I’m not really sure why. It’s not like I have a neon sign over my head blinking “ASK THIS NERD.” But it happens anyway.

I kid you not, I’ve had little old ladies and harried parents stop me in the library to ask me for book recs. I don’t even know them, and sometimes, I don’t even really speak their language. I just end up waving vaguely at the library catalog, and hoping they understand my mishmash of Chinese and English. I have no idea if they take my book recs, and it’s fine. I’ll never meet them again.

On the other hand, when it comes to people I actually know, I care. I might care a little too much. Sometimes friends ask for book recs, and sometimes I write up long, detailed lists, which I press into their hands unsolicited. And then months later, they say, “Yeah… I haven’t really had the time to read.” But I keep throwing book lists into the void anyway.

I try to sell people on the books. I gush about post-colonial fantasy, or well-written PoC representation, or look! Not everyone in this book is straight! You’ve got to read this! But I suspect that a laundry list of what I consider crucial to a good book isn’t universally appealing.

I’ve taken to handing actual books out, in the hopes that having the physical copy in their possession will get my friends to read them. And miracle of miracles, it’s worked! Like, once in the last few months. Two of my friends mentioned offhandedly that they’d read Re Jane and Sorcerer to the Crown. It was a blip on their radar. But for me, it was huge. I could make casual references! Compare opinions! Give even more book recs!

It’s silly, but when someone finally (finally!) says they’ve read a book I recommended them, it’s like when you’re super hungry and you walk into the supermarket, and someone hands you a free udon sample. The heavens open, and winged babies come soaring through to sing their praises. Your favorite person of the week has been crowned, and the throne is made of gold-embossed book spines.

I want to say that recommending books is thankless work, but that would be a lie. Sure, 99.9% of people don’t actually follow through and read the books you recommend. And yeah, I get it. Reading is a real commitment and incredibly time consuming. I’m guilty of my fair share of flaking out on book recs. (I’ve got a copy of The Traitor Baru Cormorant four inches away from me that I still haven’t read, nearly a year after my co-worker told me to read it.)

But when someone actually reads one of your book recs, it’s so worth it. Seriously, hit me up if you want a book rec. I’ve got a whole list.