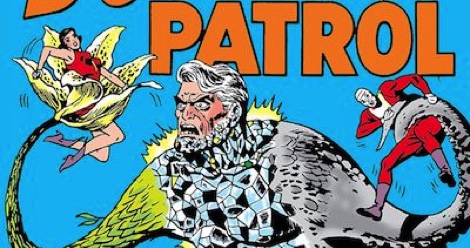 Great news, everyone! Brendan Fraser, your dream boyfriend from middle school, is joining the cast of DC’s Doom Patrol as Robotman! The series, a spinoff of Titans, will be part of DC’s streaming service, DC Universe, and Fraser will provide the voice for the CGI Robotman as well playing Robotman’s human alter ego Cliff Steele in flashbacks.

I am thrilled by this, since I love The Mummy and Looney Tunes: Back in Action very very much and think Fraser is the perfect choice to play a man who is also a robot who is called Robotman and whose real name is Cliff Steele oh my god I love comics. But in case you’re unfamiliar with the Doom Patrol and still on the fence, here’s a little bit more about the team and characters who will be appearing in the series! 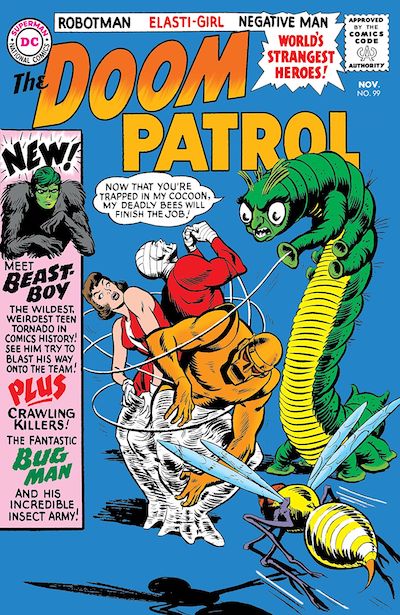 Also I’m gonna make you guys look at a bunch of Silver Age Doom Patrol covers because I love them so much.

The Doom Patrol, created by Arnold Drake, Bob Haney, and Bruno Premiani, first appeared in My Greatest Adventure #80 (June 1963), and consisted of a team of squabbling superheroes whose powers made them outcasts and grotesqueries, but were brought together by a wheelchair-using genius to defend a world that shunned them. And if that sounds awfully familiar to you, you might be interested to know that the first appearance of the X-Men (“The Strangest Super-Heroes of All!”) was cover dated September, 1963…three months after the first appearance of the Doom Patrol (“The World’s Strangest Heroes!”).

At first this was chalked up to the kind of weird kismet that happens in comics (and all creative industries in general, not to mention scientific endeavors), since that three month difference wouldn’t have been enough time to copy a published idea and get it to the stands. In 2005, Arnold Drake stated that he’d “become more and more convinced that [Stan Lee] knowingly stole The X-Men from The Doom Patrol,” thanks to creators working at both studios under the radar who could have leaked the idea to him pre-publication. Two years later, Drake walked it back and said they could have come up with similar ideas independently, “since we were working in the same vineyards.” 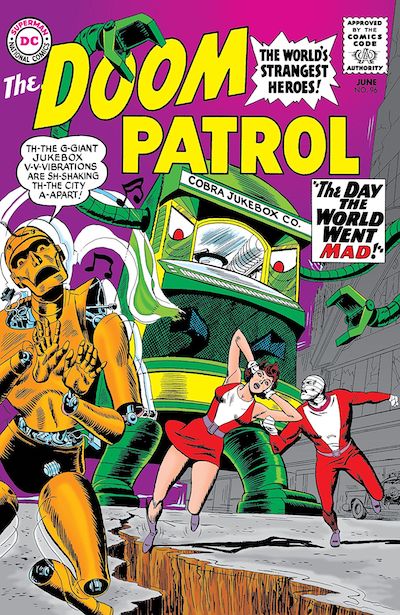 Mondays, am I right?

We’ll probably never know for sure, since Kirby and Drake are no longer with us and ol’ Stan has spun too many yarns to keep them all straight. But theft can’t really explain the appearance of the Doom Patrol’s “Brotherhood of Evil” and the X-Men’s “Brotherhood of Evil Mutants” in the same month, so maybe Jean Grey was just working her magic on those Silver Age minds. (Fun Fact #1: The Brotherhood of Evil mostly consists of a talking gorilla and a brain in a jar. They are boyfriends.) Frankly, the original Doom Patrol has always reminded me more of the Fantastic Four, with their stretcher, their energy guy, their genius, and their grumpy orange muscle. And the Fantastic Four bears striking similarities to DC’s Challengers of the Unknown…which isn’t surprising considering they were created by Jack Kirby. It’s an insular industry, folks.

Deliberate copying or not, the Silver Age Doom Patrol was undoubtedly DC’s most Marvel-ous series, between the constant friction within the team (consisting originally of Robotman, Negative Man, and Elasti-Girl—later Elasti-Woman—and led by Dr. Niles Caulder) and the self-hatred among the self-proclaimed “freaks.” It was canceled after about five years in a shock ending, with the entire team sacrificing themselves to save a small fishing village. 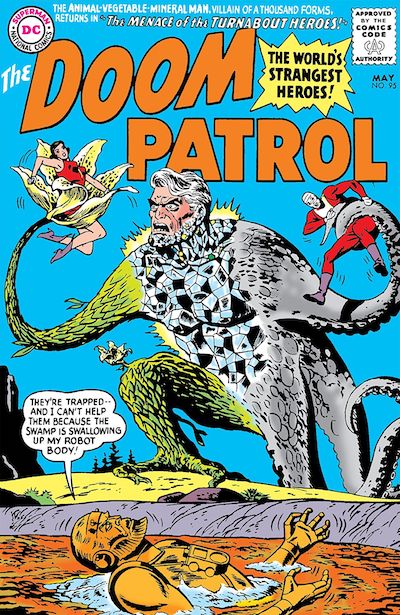 Is that Mike Pence?

Years later the title was resurrected, although Robotman was the only original member involved, having survived the explosion that killed the rest of the team, because he is a robot…man. It didn’t really get going until Grant Morrison came on board and, well, Grant Morrisoned the joint up, with characters like the Brotherhood of Dada and Danny the Street, who is, uh, a sentient street. Most notably as far as the show is concerned, he and artist Richard Case added Crazy Jane to the team’s roster.

Eventually the book got so trippy and genre-bending that it was moved to DC’s Vertigo imprint, with Rachel Pollack as the writer. The team was folded back into the main DCU in 2001 and put through a number of reboots, unboots, and resurrections, which were honestly probably some of the least weird things ever to happen to these poor kids.

Most recently, the Doom Patrol has starred in their own title by Gerard Way and Nick Derington as part of Way’s Young Animal imprint.

Intrigued? Here’s a rundown of the characters we know will be on the show: 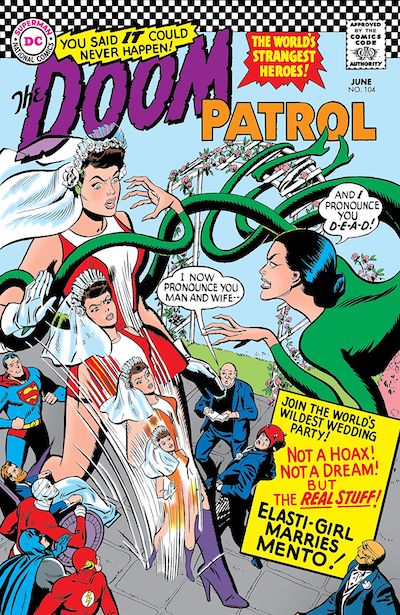 I LOVE COMICS SO MUCH

Want to pick up some comics before the show kicks off? There have been a lot of incarnations, but you can’t go wrong by starting at the beginning with the bizarre, endearing Silver Age run by Drake, Haney, and Premiani, collected in, of course, Doom Patrol: The Silver Age. If you’d like to jump in with the legendary Morrison run instead, you’ll want to start with Doom Patrol: Book One, which features art from Richard Case, John Nyberg, Doug Braithwaite, and more. (Note: Paul Kupperberg wrote the first 18 issues of this volume, so Book One starts with issue #19. Neither Kupperberg’s nor Morrison’s successor Rachel Pollack’s issues have been collected.) Or kick it new school and start with the current, critically acclaimed Gerard Way/Nick Derington run with their first volume, Doom Patrol: Brick by Brick.

Are you a Doom Patrol fan? Are you planning on watching the show?