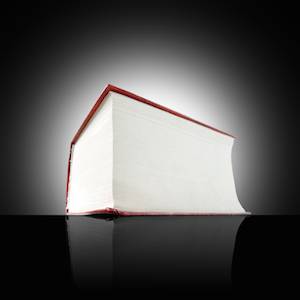 I’ve had a theory, for a while now, that books are getting longer. It wasn’t until recently that I took some time to compile the data, and frankly, I was surprised at just how right I was.

Obviously part of this experiment meant finding average book lengths for a cross-section of time long enough to mean anything. So I went 110 years back to 1904, and did some research for every 10 years. So I Googled “Best Books of…1904…1914…1924…etc.” and Google’s wizardry helped me out quite a bit, because the search results display an immediate gallery of books. It ends up being a combination of prize winners, best sellers, and attention garners. Perfect.

So I then took those books, went to Amazon and found page numbers for the Kindle versions (just to keep things on the same playing field), and averaged them out. It’s not perfect, but it’s about as good as you’re going to get. While there are a couple outliers, the trend is clear:

A few notes on this data:

Some of my favorite books of all time are comparatively short — The Great Gatsby (144), Frankenstein (134), The Autobiography of Benjamin Franklin (159), Narrative of the Life of Frederick Douglass (116), A Christmas Carol (112). Granted, some of my favorite books are also quite long, but it’s clear that our books are, in general, getting longer (or at least are longer than they used to be).

I’ve wondered why this is so. I think it’s largely the changing nature of consumers. Hardcover books are often expensive, regardless of length. As a consumer, I almost instinctively buy paper books that are meatier, because I feel like I’m getting my money’s worth. It’s also never been easier to lug around huge books with us at all times in our digital devices, so why not make ‘em longer. A publisher a hundred years ago might have scoffed at the cost of printing a long book, but now with e-books, the cost of publishing a 1,000-page book vs. a 150-page book is virtually the same (obviously it’s still different with print versions…).

Our lifestyle may also play a part. This is completely just conjecture, so bear with me. We, as a people, are far more sedentary than we were a hundred years ago. Does our tendency to sit on the couch for more and more hours a day play a part in how we consume media? Absolutely. Look at the phenomenon of Netflix binge watching. Could the same effect take place with books? We are into bingeing our media, and the bigger the binge the better, so we eat our hearts out with giant books that can completely remove us from reality and how sedentary we really are. If books were shorter, our escapes from reality wouldn’t last so long.

There are even Goodreads book clubs based on lengthy novels, but none that I can find based on short novels. There are bookish goods extolling the praises of the “big book.” We have actually fetishized, to a degree, the lengthy novel.

Have consumer tastes and habits changed that much in 100 years? Have authors themselves changed in the last 100 years? Why has the big book come to outweigh the short book in the hearts and minds of readers? Is the short book dead? Or just on a reprieve?