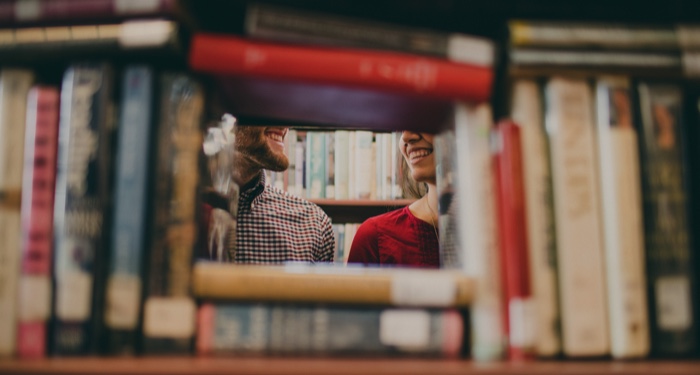 Eight years ago, one of my colleagues asked if I’d go to the library with him on our lunch break. While we wandered the aisles, he shared funny anecdotes about his time working in the Virginia Tech libraries as a student employee. I told him about how I wanted to go back to school for library science. Somewhere between the journals and popular fiction, sparks flew. Several games of Scrabble later, I started dreaming about building a life and a library with him. Who wouldn’t want to marry a book nerd?

Today we have a cozy life together and overflowing bookshelves. While our reading interests are wildly dissimilar, it makes our shared collection more diverse. In the living room, his presidential biographies compete for space with my thrillers and thin volumes of poetry. In the office, you’ll find books on education that we’ve both turned to time and again for work, like Paulo Freire’s Pedagogies of the Oppressed.

Every year, I make him agree to a mutual book buying ban before our university’s library sale. Regardless, we both sneak into the house with sheepish grins and bags overflowing with well-loved tomes.

Those are not the only promises we’ve broken that deal with books.

My husband proposed to me in early December. That same year for Christmas, I gifted him a copy of The Secret History by Donna Tartt. If he was to be my husband, it only made sense that he read my favorite novel. I believed he’d glean truths from it about who I was that I couldn’t articulate myself. He agreed to finish it before our wedding day, but only if I was willing to put aside my snobbery and read the Harry Potter series. After a bit of grumbling, we shook on it.

I made it through a fourth of Harry Potter and the Sorcerer’s Stone before putting it aside to read every book in Jennifer McMahon’s oeuvre. While I never lied outright about discontinuing the series, I hoped my partner would fail to notice my lack of excitement around our Harry Potter reading experiment.

In a speech my then-fiancé gave at a special event on campus that semester, he shared a quote from Donna Tartt that I knew was there just for me. I felt loved and seen. Also, guilty. Enormously guilty. That night, I returned to Harry Potter and made my way through 20 or 30 pages before realizing it was time to come clean. There was no way I was finishing the first book, let alone the series.

It was at least another couple of months before my husband revealed that he’d never finished The Secret History. He read the first half, hated it, and pieced together the ending through reviews he found online.

There are more important bookish moments that have passed between us that make up for our lies.

MEMORIES FROM A BOOKISH MARRIAGE

I carried a book of poems by Rumi on my walk down to the altar on our wedding day. Instead of having the church pianist play “Canon in D” by Pachelbel, she played “The Book of Love.”

My husband experienced pain after undergoing PRK surgery that was so miserable he couldn’t open his eyes. I read a large chunk of Harry Potter and the Chamber of Secrets aloud to distract him from his discomfort. While I’d make for a lousy audiobook narrator, he pretended to be amused as I tried to create unique voices for each of the characters. My Albus Dumbledore impersonation left a lot to be desired.

I often ask him to tell me a story on the nights my insomnia is insufferable. A few weeks ago, he surprised me with the audiobook version of Go the F**k to Sleep by Adam Mansbach. If you’re unaware, it’s narrated by Samuel L. Jackson. The audiobook is a real treat, even if it wasn’t exactly what I had in mind.

There’s an episode of The Marvelous Mrs. Maisel where a woman at a drag show gives Midge the name of a therapist and tells her they worked miracles for Sylvia Plath. When I realized my husband didn’t know who Sylvia Plath was, he patiently paused the television while I gave him the abridged version of her life story and read him “Daddy.” It didn’t matter to me that he wasn’t familiar with her work; it mattered that he was willing to learn and listen just as I have when he breaks out facts from his nonfiction on politics and military history. I love that seven years into our relationship, we’re still teaching one another things on a daily basis.

I finished writing my first novel manuscript while he chipped away at his dissertation. After we celebrated our victories, we took turns editing one another’s work. Our reading lives and writing lives have always been intertwined.

Despite my many requests, he won’t agree to declutter our sagging bookshelves via Swedish death cleaning or the Marie Kondo method. I think he knows that just makes me love him a little more.