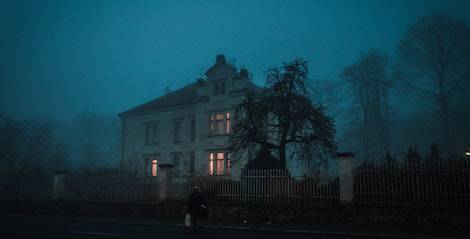 From the first few pages of Douglas Clegg’s Goat Dance, I was hooked. Which made me wonder if there was something wrong with me, mentally.

Set in the small town of Pontefract, Virginia, the novel hops from character to character, spinning a web of mini-narratives centred around the journal entries of the protagonist, Malcolm “Cup” Coffey. Cup left Pontefract in his teens due to a traumatic accident that caused the death of a local bully, but at a message from his unrequited childhood love, Lily Cammack, he returns at once. These two elements of his past would resurface throughout Cup’s journey, as an ancient evil in Pontefract unleashes nightmares on the town in the form of the townsfolk’s dead relatives, dredging up aspects of the past they thought they had long put to rest.

I got Goat Dance because of its Amazon ratings. I wasn’t sure, at first, if I wanted to invest my time in it–until Chapter 3. That was the point of no return. There’s this matricide scene in which Clegg shows Jake Amory, a teenage murderer, struggling with his conscience through a wilful hallucination:

When Odessa yelped an image formed in Jake’s mind: he saw a bristling rat with blood-red eyes lying on his ma’s bed. … Blood spurting out of its snout. Its whiskers bristling as it gnashed its silver, dagger-like teeth. It shrieked in pain, its red eyes widening in feral terror. Dirty, dirty, filthy, the words flooded through Jake as he lifted the gas can over his head, you stuck your fucking whiskers in the wrong mousetrap, you dirty, dirty, and brought it down full force on the rat, oh God no Ma what am I

The scene ends abruptly with this broken stream-of-consciousness, no punctuation. The violence is graphic without being tawdry. Murder, such a common trope in Horror, is described with a unique literary adroitness that makes the scene irreproducible in film.

But Clegg’s only just starting to flex his Horror muscles. The next few chapters twisted my stomach, had me curling my lip in near-nausea. The later half of the novel was a gore fest.

It got so bad that sometimes I had to put down my Kindle. Breathe, calm my stomach, do a bit of self-questioning.

My mother disapproves of Horror. “Fix your thoughts on what is true, honourable, lovely, and pure,” she would say, echoing Philippians 4.8 of the Bible, but I’ve always disagreed with her on the basis that a bit of Horror as entertainment would do no harm to my spiritual or mental health. It wasn’t like I was obsessed or anything. But when I found myself gobbling up Goat Dance, I started to doubt my motives. I mean, why read Horror? What, precisely, was the root of my fascination? Was it voyeurism? Sadism? This sordid thirst for the sensational–did it stem from the same corrupt root as whatever sick drive makes people watch snuff films over and over, despite the expressions of disgust or horror on their faces? I’ve never understood that, but maybe I shouldn’t judge.

Aristotle would say we’re drawn to horrific images for catharsis. After a vicarious experience of fear, we are relieved of that emotion, or at least similar ones. Perhaps a fascination for horrific images is just the mind’s way of grappling or coming to terms with its own fears, through a traumatic repetition compulsion–the same reason we have recurring nightmares. I guess it’s just not very nice to use real deaths for this (although, technically, it’s not like the dead would know).

It’s normal to like being scared, in a safe environment. It’s why we like rollercoasters–for the adrenaline. But I definitely don’t like being disgusted, and I can’t imagine anyone who would, so why couldn’t I tear my eyes away from Clegg’s gruesome imagery, the broken, bloody, re-animated corpses, the skins turned inside out? If these images made me feel sick, why didn’t I just skip over them to chase solely after the resolution of the plot? Catharsis wasn’t an adequate enough explanation, and the question kept bugging me. Why read Horror?

Ernest Jones, the British neurologist and psychoanalyst who wrote On the Nightmare, would say that our paradoxical attraction to these repulsive Undead things is due to our repressed wish for an incestuous encounter with the dead. To mask this forbidden wish, our encounter with the dead is transformed, through denial, into an attack, and desire turns into revulsion. In light of Clegg’s often-seductive portrayal of the dead before they turn into flesh-eating monsters, this theory seems to make sense. But it’s certainly not comprehensive enough to explain our attraction to Horror in general, since not every monster arises or intrigues due to a sexual wish. Besides, I really don’t think I’m necrophilic, even if Clegg’s characters subconsciously are.

As the pages flood with gore, my horror diminishes, giving way to a simpler sort of disgust, with a tinge of impatience. I don’t skip any part of the novel, but there were several gory scenes that could be skipped. This horror had started to lose its attraction.

So the appeal of horror is certainly very dependent on its narrative context, whether fictional or not; and the wish we want to fulfil isn’t psychosexual but merely intellectual–it’s curiosity, pure and simple. That’s the conclusion Noël Carroll, in The Philosophy of Horror, came to, and it seems convincing enough. Isn’t that fundamentally why we read, after all, to open our eyes to new worlds?

Then again, I was the creepy kid who dug up snails and earthworms from the ground to stare at them with disgust, so I don’t think I can speak for the normal majority.

I’d like to know what other readers think! Do you like Horror, and why? More importantly, is Horror good for us? Would the world be better or worse off without it?