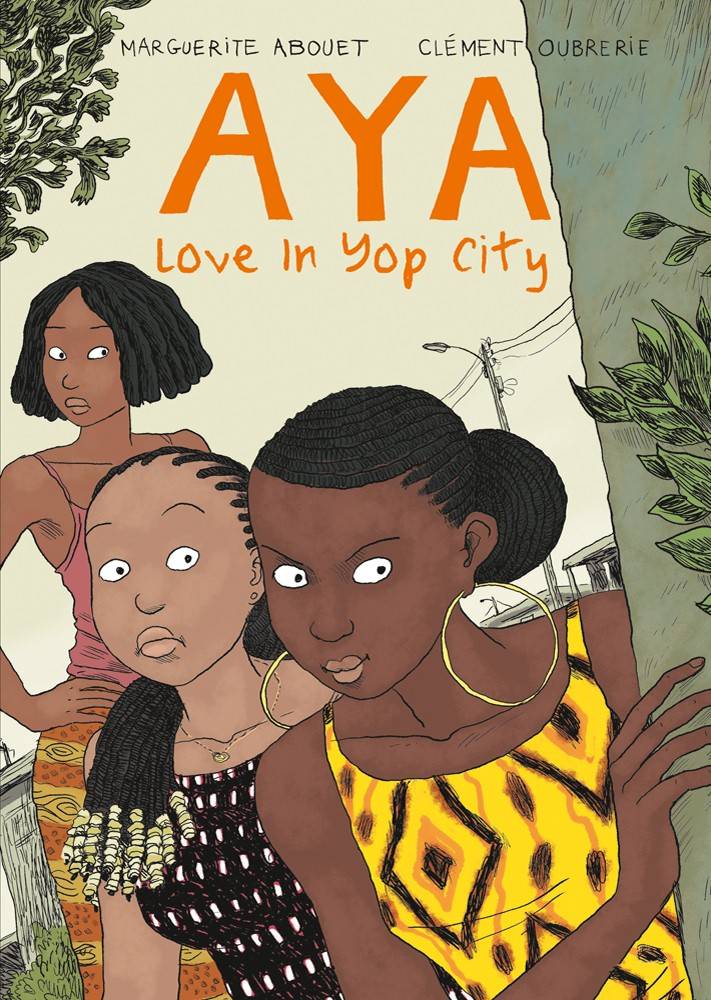 When we talk about world-building in fiction, we usually mean summoning new and unknown realms in the speculative genre—Krypton, Asgard, Middle Earth—breathing life into landscapes that never existed, illustrating their architecture, customs, and eccentricities with words or images. Comics realize fantasy spaces so beautifully that sometimes we forget how well they show worlds that already exist.

Consider the old print/webcomic Pathetic Geek Stories, or a similar compendium, Stuck in the Middle: Seventeen Comics from an UNPLEASANT AGE. If any part of your mind has ever blocked out the pain of adolescence, these stories instantly revive those memories in strong and sharp relief. The graphic format is a potent medium for memoir; it allows the artist to transplant the reader directly into a specific time and place, even if that setting is outside the reader’s knowledge. Any world can be built on text and pictures. Comics make stories real.

The book Aya is a stunning example of this phenomenon, drawing strongly on Marguerite Abouet’s memories of her childhood in the capital city of Abidjan, Ivory Coast, in the 1970s. Most western readers will be wholly unfamiliar with the details Aya’s world—many western readers are probably wholly unaware of the existence of Aya’s world—but with a few pages and a few brushstrokes, we’re instantly transported to her neighborhood: Yopougan, or “Yop City.”

Aya’s TV and telephone may be familiar to anyone over the age of 30, but what about the colorful print wraps, the open air markets, the courtyards hung with laundry? After a trip though this book, I can picture it all clearly, the bars, the weddings, the street harassment, the homes of the wealthy and the working class. The rich family numbers their multiple living rooms; the poor family sleeps nine kids in a single bedroom.

One of my favorite aspects of this book is the way Abouet demystifies her world for outsiders. If you didn’t grow up in Abidjan, you don’t know what happens in the empty market when the sun goes down. If you’ve never gotten dressed in the Ivory Coast, you can’t recognize the colorful language of the pagne, let alone decode it. If you’ve never been a teenager in Yop City, you won’t guess that inviting a girl to eat alloco makes for the perfect first date. With the help of context clues and a few useful appendices, brick upon brick of world-building, this all comes clear.

It’s a different world, but one with parallels we can understand, once they’re explained. The market at night transforms into the “1000 Star Hotel,” the local equivalent of lover’s lane, where young people go to hook up in the dark on the empty vendor tables. The patterned cloth pagnes communicate a woman’s receptivity to romance. The Allocodrome serves fried plantains. Abouet also gives us recipes for ginger juice and peanut sauce, in case readers want to taste the culture, and snippets of music, along with directions for booty-shaking and various methods for getting around protective parents. It’s all real, and it’s all different from other worlds we’ve found in comic books.

It’s the same with the characters, who are no more foreign than the kids we knew in school. Aya only worries about getting her homework done so she can go to medical school and become a doctor, regardless of her father’s objections. Bintou cares for nothing but dancing and flirting with boys. And Adjoua has secrets that nobody can guess. Words and images, it takes only the briefest brushstrokes to paint the emotional picture of Aya “wondering why anyone would think of beer as a vitamin,” getting irritated and then enraged by the constant unwanted advances of random men, looking delighted at the arrival of her friend’s new baby.

Plenty of wonderful graphic novels lack a clear conflict or plot structure (Hernandez’s Marble Season, for example) and Aya seems to trip along without any strong concern for connective tissue, until suddenly, in a twist comparable to the surprise in Jane Austen’s Emma, the threads all come together in the book’s final panel, solving a mystery whose existence the reader barely even noticed in the story’s variegated tapestry.

It’s a perfect and complete world, the universe of three teenage girls in a time and place optimistic enough to allow them to dream of something more than what they’ve known. You’ve never been here before, but from the first panel, you’re welcomed to the place the author once called home. This is the world that Abouet has worked to create: home, Yopougon, Abidjan, Ivory Coast, 1978.