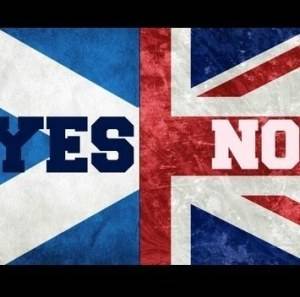 Something wonderful and terrifying is stirring in Scotland.

Voters will go to the polls on Thursday to answer a deceptively simple question: should Scotland be an independent country?

It is a question that has animated this brilliant, sodden patch of earth in a way I have never seen before. As it should. The stakes are high.

To answer no would protect the 300 year-old, incredibly successful union of countries that is the United Kingdom from the forces of consciously uncoupling. To say yes would birth the world’s newest sovereign nation and empower it to take its destiny into its own hands.

Nearly 100% of those eligible to vote have registered to do so. Internally, hearts and heads have been deliberating for months. Externally, village halls, street corners, and pubs have all become arenas for debating big, gristly and inspiring ideas. The marrow of civic life has been slurped up with, on the whole, remarkable good manners from both sides.

Thinking about voting on Thursday makes my stomach sink with the sickening delight of a plunging roller coaster. To somehow match the import of this decision, the ballot sheet should not be made out of something so everyday as paper.

In Scotland, you see, the ‘everyday’ has been temporarily jettisoned. Everything is heightened, everything is slightly off. It is as if someone has put a woozy Instagram filter over our lives.

No, instead of paper, the ballot should be made out of something like lead. By wielding it, you could cause immense damage or begin to build something unimaginable only a few years ago.

And as you would expect with something as vertigo-inducing as this, the nation’s writers have had a lot to say. They have grappled with the gritty mechanics of economic theory and lyrical high-minded ideals in equal measure.

It is fair to say that, of those who have waded into the debate, the majority of writers in Scotland or authors born here favour independence. This shouldn’t be that surprising.

Independence is a Big Idea. It is the realm of the unimagined, the unwritten. Give a writer a blank page and watch them go.

Here’s what some of those saying ‘Yes’ to Scottish independence have said:

Janice Galloway, author of The Trick Is To Keep Breathing:

“In the present, what we have on our hands is an astonishing thing: a chance to remake a country without bloodshed. This is an opportunity… In the blink of an eye, our children’s children will be in charge of the tough stuff. We need to prepare the ground for them now and not be afraid.

There’s nothing’s stopping us. We can do it if we want to. Yes. Yes. Yes.”

“No wonder this has moved David Cameron [The UK Prime Minister] to tearful dismay. Having your world view fundamentally questioned, your sense of self, your financial security – it’s a shock. In the current UK, it’s the kind of shock that’s meant to happen to the poor, to people with disabilities, to Other People. The yes vote is about Other People crying as little as possible. Life will still happen, politicians will still be politicians and there’s a huge amount of work ahead – with land ownership reform and environmental protection high on the list – but yes is about possibility, about a positivity with which Scots are not usually associated, a moral outrage with which they often are…

“In other words, the paradigm has shifted. This could and should be good news. Not Paradise Now, but certainly Progress.”

“It isn’t in the nature of any state to want to cede territory but it begs the broader question: why is the British Establishment so desperate to keep Scotland? Well, if there’s a Yes vote, north of the border instantly gets rid of the hereditary second chamber, the City of London and Britain’s public-school elites, all those forces superfluous to good government but expensively grandfathered into our current system. There will also be a proper constitution drawn up, conferring citizen rights and designating responsibilities. It’s inevitable that people in England will then look north and think: ‘I fancy a bit of that.’”

“It’s not Scottish patriotism or nationalism with a capital N, or derogatory towards England in any way. I love England, I’m amazed by England: the old pubs; the leafy lanes; Edward Thomas’s poetry. I just see it as a democratic improvement, as a way forward. I see it as progressive that a small country is represented by its own parliament democratically.”

“Independence is not an economic decision, it concerns self-respect. How many countries do we know in the world where the people need a debate about whether or not they should determine their own existence?”

When it has come to advocating for people to vote no and remain part of the UK, the volume of writers has been less, but they count among them probably the biggest name of them all. We’ll get to her in a second. But those who have engaged, have done so with equal passion and heart.

Several big name writers, such as William Boyd, Malorie Blackman and William Dalrymple, all signed an open letter to Scotland:

“The decision on whether to leave our shared country is, of course, absolutely yours alone. Nevertheless, that decision will have a huge effect on all of us in the rest of the United Kingdom. We want to let you know how much we value our bonds of citizenship with you, and to express our hope that you will vote to renew them. What unites us is much greater than what divides us.

“I am a no voter and this is why: My family are historical flotsam. We are not policy makers but the people who suffer it. Those with few social resources do not benefit from rupture in the short term. Sometimes they do in the long term, more often not in my reading of history, but if you have little, then less, the short term can be very long indeed. Since the cost of rupture is borne so unequally, the provocation has to justify it and I don’t think it does in this case…

“Independence is a conceptual mistake. We live in a global environment. The nation state is an irrelevant 17th century construct, and the autonomous nation state is even more fantastical. All countries are bound by a web of international and supranational obligations. We would not be autonomous. We would be disadvantaged. Factionalizing can only benefit stateless corporations as we vie to give them the best deal. And, in a rapidly warming world, forming a small country, reliant on continued oil production, is in no one’s interests, not even our own.”

And then there is J.K. Rowling. The Harry Potter author has been a dedicated and considered defender of remaining within the UK on her website and on Twitter. She has backed her words up with money too. She has donated £1 million to the ‘No’ campaign:

“My hesitance at embracing independence has nothing to do with lack of belief in Scotland’s remarkable people or its achievements. The simple truth is that Scotland is subject to the same twenty-first century pressures as the rest of the world. It must compete in the same global markets, defend itself from the same threats and navigate what still feels like a fragile economic recovery. The more I listen to the Yes campaign, the more I worry about its minimisation and even denial of risks…

“If the majority of people in Scotland want independence I truly hope that it is a resounding success. While a few of our fiercer nationalists might like to drive me forcibly over the border after reading this, I’d prefer to stay and contribute to a country that has given me more than I can easily express.  It is because I love this country that I want it to thrive.  Whatever the outcome of the referendum on 18th September, it will be a historic moment for Scotland.  I just hope with all my heart that we never have cause to look back and feel that we made a historically bad mistake.”

It is an exciting, bewildering time to be in Scotland. Big political beasts roam abroad. The ground feels like it could shift beneath our feet at any time. Some old certainties are being shaken, others are being reaffirmed. Everything and nothing could change.

We go to the polls with our favourite writers’ words ringing in our ears, articulating, as they always do, our most acute worries and our grandest hopes.