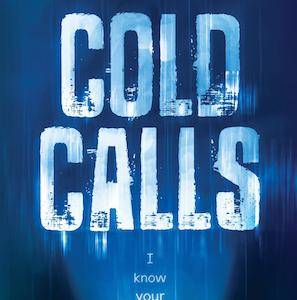 This giveaway is sponsored by Cold Calls by Charles Benoit.

Three high school students-Eric, Shelly, and Fatima-have one thing in common: “I know your secret.”

Each one is blackmailed into bullying specifically targeted schoolmates by a mysterious caller who whispers from their cell phones and holds carefully guarded secrets over their heads. But how could anyone have obtained that photo, read those hidden pages, uncovered this buried past? Thrown together, the three teens join forces to find the stranger who threatens them-before time runs out and their shattering secrets are revealed . . .

So much about being a teenager makes your heart race: crushes, kisses, secrets, and sneaking out at night. But that’s not all, and anyone who has been a teen knows it. When you have the kind of secret that would change your life if it got out, well, that’s terrifying. And when it falls into the wrong hands? OH BOY.

For this giveaway, we asked you to tell us about the best YA books about secrets, bullying, and blackmail out there. Here are your favorites:

Category ID: 1786
Category ID: 468
What’s Up in YA? Newsletter
Sign up for What's Up In YA? to receive all things young adult literature.
Thank you for signing up! Keep an eye on your inbox.
By signing up you agree to our terms of use

Before I Fall by Lauren Oliver

If I Lie by Corrine Jackson

The Extraordinary Adventures of Alfred Kropp series by Rick Yancey

The Chocolate War by Robert Cormier

Thirteen Reasons Why by Jay Asher

Crash and Burn by Michael Hassan

The Moment Before by Suzy Vitello

The Disreputable History of Frankie Landau-Banks and We Were Liars by E. Lockhart

The Last Book in the Universe by Rodman Philbrick

The Red Sheet by Mia Kerick

Burn for Burn by Jenny Han and Siobhan Vivian

Some Girls Are by Courtney Summers